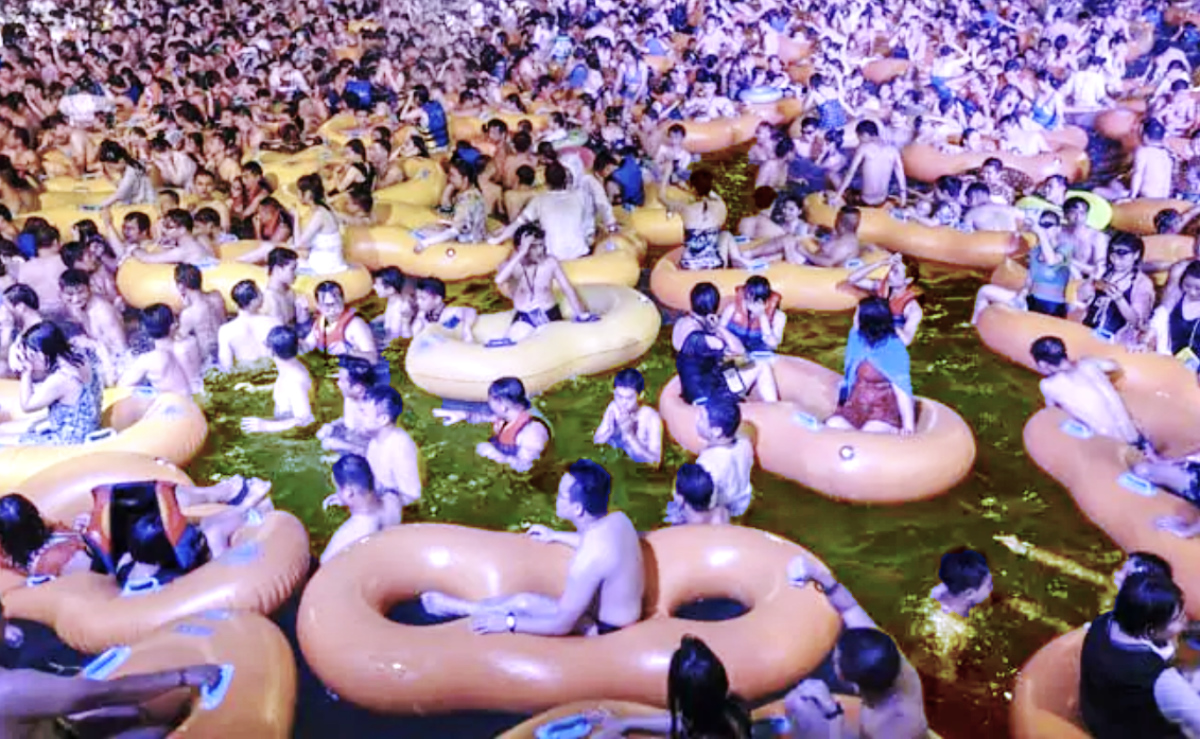 Roger Mayfield, 58, a British businessman from Surrey, visiting China, decided to venture to Wuhan Water Park with a colleague for a swim.

“We arrived at Wuhan’s famous water park early, and there were already 40,000 swimmers in the yellow waters. It was certainly not full capacity, and if we stayed till 4pm the numbers would rise to over 120,000 Chinese people in the vast pool.

“One thing that strikes you immediately is the smell of urine that permeates the air, many Chinese people do not have functioning bathrooms, or have to use municipal public lavatories, therefore a nice warm public pool suffices. There are young toddlers in soiled nappies splashing around with their proud parents, no doubt their faecal matter leaking into the water as well.

“An elderly gentleman even brought his own soap, and lathers himself enthusiastically, he hocks up a large green phlegm ball and spits it in the water before pinching his nostrils and snorting out a large quantity of stringy snot into the bubbling concoction.

“Watching the melee of assorted swimmers and their rubber tubes, as well as the disgusting behaviour of the Chinese swimmers, we get second thoughts about the escapade.

“There is absolutely no social distancing going on here, and the water, even though chlorinated, is a disgusting soup of bodily fluids, dirt, and shit.

“At one point, one of the kids tells his mummy he did a poo. She looks around frantically in his swimsuit, but he points a few yards away. The turd is floating towards a couple who are throwing each other about, play fighting. The mother then realises where the turd is sailing and tries to shout out a warning. Unfortunately, it comes too late, and the girlfriend lands directly in the floating turd’s path opening her mouth in the water. When she finally gets out of the water and closes her mouth, she realises something has swum into it — a large bristling gooey turd. I had to look away at that point, especially as I felt vomit filling my mouth.

“But it was party time now at the pool, a communist party organiser appeared with lots of beach balls which he threw into the pool area. He encouraged everyone to sing patriotic communist songs to keep the spirits up.

“Whilst everyone was singing, no one noticed the body of an old woman lying face down in the water. It was obvious to us that she had definitely shuffled off the mortal coil, and swallowed a mouthful or five of that awful soup killing the old nag instantly.