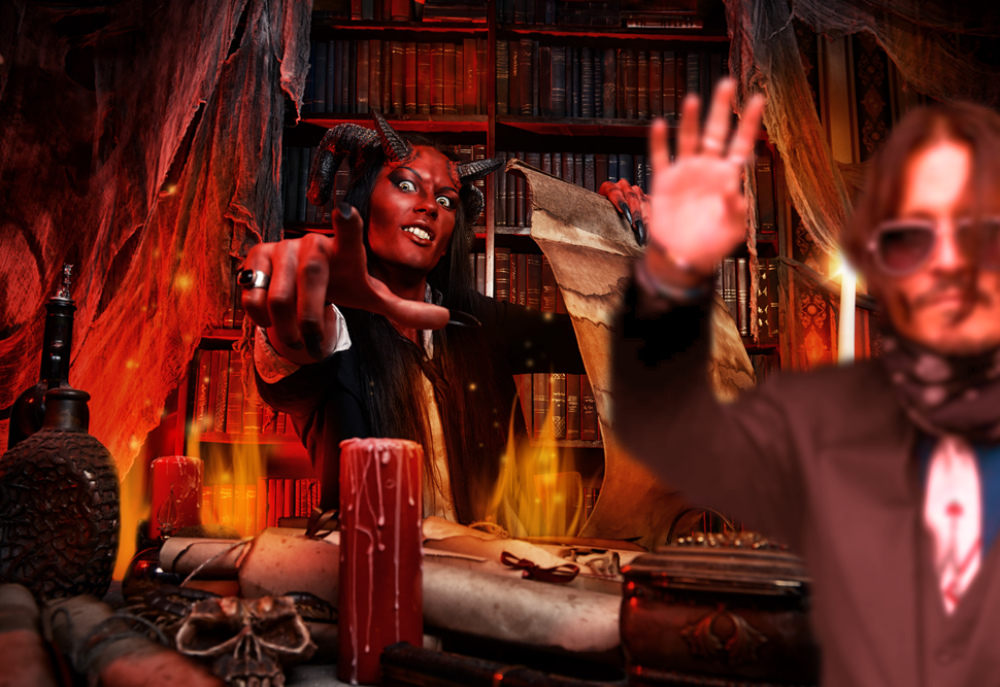 It is not shocking or surprising in the least to see someone like Hollywood celebrity, Johnny Depp self-destruct through the heavy use of drugs, and gluttony. The glamour is illusory, and the depravity very real, as this person does not have a soul any more, lost in the winds of celebutardom and fantasy, snorted half of Peru up his nostrils, and spent enormous sums of his wealth on nothing much in particular. Depp is now a mere shadow, a darkened element that has had the life kicked out of his corpse, a persona non grata dragging his own carcass through the law courts for nothing but his mangled ego, every day becoming more crippled as new revelations are unearthed.

Moaning like a big baby on private jets, and rolling around shit in soiled bedsheets, Johnny lost his soul, he lost his cult status, he lost his magic, and now he probably will lose his court case.

That’s the thing about these modern celebrities, they have no mystery any more, not like the Hollywood set of old, now we know every minute detail about these spoiled dilettantes and there is no magic, no curiosity, no enigma. They spill all on Twitter and reveal their true characters, as moronic, spoiled cunts who think the world revolves around their bloated heads, or they display their dirty laundry for everyone to see purely to get some attention for their fame whore narcissistic schizoid personas.

As far as many are concerned to watch the slow train wreck of these celebrity ‘icons’ is a breath of fresh air, let them destroy themselves in front of the baying crowds, for their souls have already been sold and packaged for a hellish immortality once they pop the mortal coil.

Johnny Depp used to be thought of as the epitome of cool, but that was all a big illusion, as is 99.99% of Hollywoodland, and the La La posse of thieves, liars, and perverted criminals. The previous description is similar to Steve Albini’s words accurately depicting the ‘music biz’.

One could possibly say that the internet age has effectively destroyed Hollywood, and the ease of streaming either from legal or illegal channels any film ever made has brought a terrible blight on the studios, who for decades now have been relegated to making superhero films, which are not cinematic pieces in any sense but CGI laden monstrosities decked out with steroid addicted ‘actors’ in it for the money only. These superhero movies were more in line with amusement arcades, and theme parks with little or no pathos or rhetoric, devoid of real acting, junk to be forgotten in the mists of time.

The coronavirus, has thankfully halted much of the Hollywood productions, and the mediocre scripts, the remakes of remakes, as well as the CGI heavy plastic productions with no story line, or connectivity.

As for Johnny Depp, yes, he worked with Jarmusch, Polanski and some other decent directors, but his recent shenanigans in the courts have ultimately revealed the ugliness of this person to a point that his career is almost definitely over. Who wants to work with someone like that, a pathetic moaning big baby who cries and viciously lashes out if he doesn’t get what he wants?

Depp, you’re a fucking loser, just go to one of your many mansions and continue to self-destruct, because soon it’s collecting time, and it seems midnight is coming up sharply..you’ve had your fill, now it’s time to pay up..