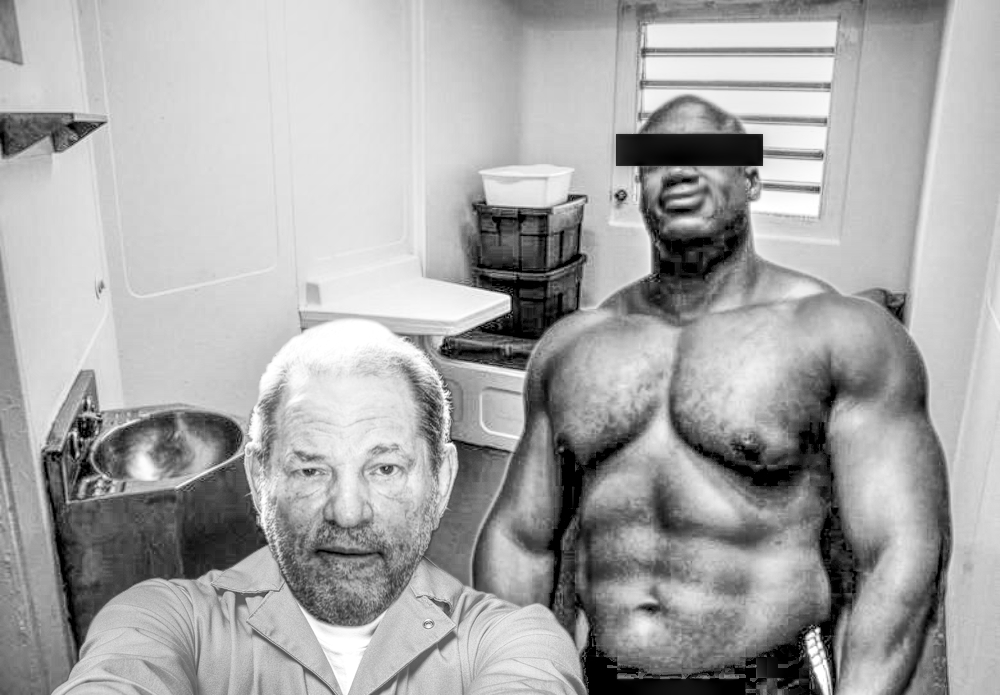 Karma is an actress who gave head and even swallowed for a leading role, but never got the part in the end, that is until the #metoo court appearance when her acting skills really came into use.

“You just should have given them a role Harvey, maybe even a bit part, but you didn’t, and now look at ya, you’re going down, and this time you’re gonna be the bitch,” a former Miramax worker revealed shaking his head in disbelief.

Mr. Weinstein is now going to go to Rikers Island where he will be put in a cell for a decade or so and become Bubba’s play toy.

One minute he was supping at the Four Seasons, next he was cuffed and thrown in a holding cell whilst vindictive #metoo feminists heckled and jeered at him, how’s that for a come down?

Rikers Island has a reputation for brutal violence, both abuse, rape and neglect of inmates, attracting increased media and judicial scrutiny that has resulted in numerous rulings against the New York City government, and numerous assaults by inmates on uniformed and civilian staff.

In May 2013, Rikers Island ranked as one of the ten worst correctional facilities in the United States. Violence on Rikers Island has been increasing in recent years. In 2015 there were 9,424 assaults, the highest number in five years.

“We call Rikers the Dozer, because people who come here, they get flattened, they get put through the mincemeat machine and spat out all dead and shit. Unless you are seriously connected, high-end mafia consigliere or a gang boss, you are free meat. We like fresh meat here, even though Harvey is a fat old bastard, he is gonna have to get down on his knees and do the job that needs to be done, hmmm, hmmm,” Bubba Jones, a felon who is doing sixty years in Rikers Island prison revealed.