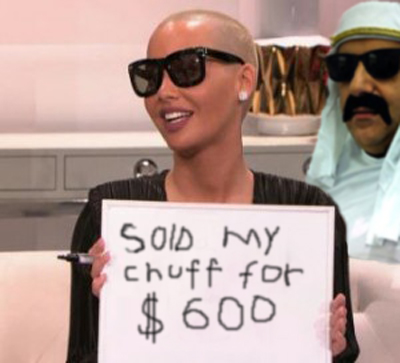 “I needed the money. Things hard in the rap ghetto these days. I aks my boy Kwanye, but he too busy wit da bubble butt to care no mo,” the 33-year-old model opined on her Instagram page.

Naturally, after posting the advert on Instagram of her exposed bush, the pic was taken down an hour later for violating Instagram’s terms and conditions.

The Saudi Sheikh, Prince Abu bin Dawallah, will take ownership of Rose’s pussy from next Tuesday, where she will be flown out from Miami to Riyadh in a private jet to deliver the goods.

The Sheikh’s spokesman, Abdul Ghaith, told Reuters that on delivery, there may have to be an inspection/quarentine period, so the delivered goods are deemed Halal.

“We have to inspect and test the delivery first. The price we paid was low, because the merchandise has been used by many before. You can smell it from 100 yards. She needs the money, so the Sheikh took pity on her, however if it offends his sensibilities too much due to wear and tear, he may just pass the skank onto his stable boys, or other lower staff members.”

The Sheikh is a keen camel racer in the Saudi Kingdom, and has four teams that race the circuit. Last year, his favourite camel named ‘Katie Hopkins’, won the Riyadh Grand Camel Tournament.