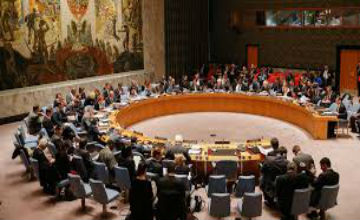 Speaking at the UN security council meeting, Ban Ki Moon, the Secretary General was adamant that a solution to the grave problem must be found.

“The world has been torn apart by the news that Brangelina are divorcing. This event is like an earthquake in Hello land and the National Enquirer. Forget about starving refugees in Sudan and Syria, we must solve the Brangelina problem immediately.”

The Russian contingent rose to the occasion by suggesting that the world population may be placated with two blow up dolls of the celebrities besides their menagerie of adopted children.

“We could use blow up dolls, or for Ms Jolie a few sticks tied together with string. No one would know the difference,” Andropov Vladov, Russia’s delegate suggested awkwardly.

The French delegate, Jean Renne Le Chateau, suggested that there should be re-runs of Pitt and Jolie films for the next month on constant loop in all countries. This way, he reasoned, people would actually be put off by the two as their movies were so awful and no one would care any more.

It remains to be seen what the solution is to such a celebrity tragedy as the Brangelina divorce.

Hopefully, it will all blow over in a few minutes and no one will care, the good news is Brad will be able to get a handful of tit soon and maybe Angelina may eat something for the first time in four years.

Choosing Cheap Kitchen Units to Give Your Home a Brand New...