Britney Spears the ailing autotune celebrity has been ordered by the Catholic church and her keepers to undergo an exorcism.

The once-in-a-lifetime experience will be filmed live on MTV and broadcast all over the world.

After having 12 highly public nervous breakdowns in January, Ms Spears is slowly reducing the monthly frequency of her breakdowns from a high of 34 in December.

Pope Benedict himself has intervened on this sensitive matter and has ordered his chief exorcist to complete the harrowing task of casting out the devil and satan’s demons from Britney.

Britney has already tried the typical celebrity wishy-washy cults like Scientology and Madonna’s celebrity perversion of the real Kaballah, but these only perpetuated her illness and made her even more sick than she already is.

The Clenbuterol worked for awhile but the crystal meth and cocaine was a bridge too far. The rehab did not work and having the starlet chained down in an ambulance did not restrain her.

Adnan Ghalib, her paparazzi boyfriend, fears for his subject and has concerns that she may not complete her contractual obligations with him if the demons are not cast out soon. 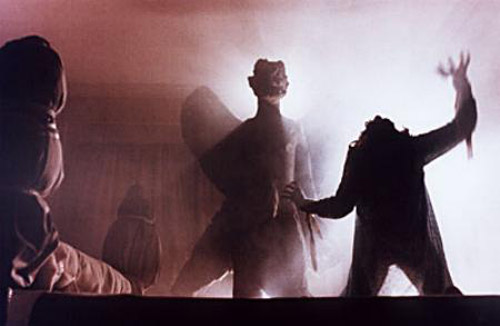 “Her room is always very cold and there is a frost in the air. She speaks with many tongues, including a fake British accent and she levitates every few seconds. I am sick of the pea soup that is projectile vomited from her cussing mouth. Her eyes are red – is that normal?”

The Daily Squib reporter, Ebner Pazuzu, accompanied Ghalib and a bodyguard into the ailing celebrities room when she started speaking an ancient British dialect called ‘mockney’. After levitating above the bed for a few minutes, Britney regurgitated fifteen bags worth of Cheetos and a Starbucks Mocha with extra chocolate sprinkles onto our terrified reporter. Our reporter has since been given compassionate leave.

“She then started to walk down the stairs backwards on all fours. At first we thought she was practising a dance routine for a performance but when her head made a 360 degree turn we knew this was something else.”

MTV will broadcast the LIVE Exorcism this Friday at 8pm PST.