The LAPD, Texas Rangers, SWAT, Navy Seals and Canadian Mounties have all joined the search for Britney Spears after she escaped through a tiny window in the maximum security mental wing of the UCLA hospital where she was being held.

After being committed to the UCLA mental asylum on Thursday, Ms Spears was deemed “Gravely Disabled” by the doctors.

Fernando Rodriguez, one of the hospital attendants, told the Daily Squib, “We don’t know what time she escaped, but it was between her meds – between 4 and 5 in the morning. Oh lord! If she don’t take her meds it ain’t gonna be pretty y’all.”

The UCLA area has been besieged by thousands of photographers and news crews. The air is so thick with news helicopters that a midair collision is inevitable.

California Governor Arnold Schwarzenegger has called for a code Red
Alert situation and is under mounting pressure to call in more state
troopers from neighbouring states to calm the situation.

Britney, the ailing celebrity mime artist, apparently blew a gasket when she heard that her whole estate is now under the care of her divorced parents.

Britney’s father has already moved his trailer into the grounds of her mansion and her mother seeks to follow next week. The chickens and farm animals will also be shipped in with the extended family of 450 cousins, aunts, uncles and assorted offspring. 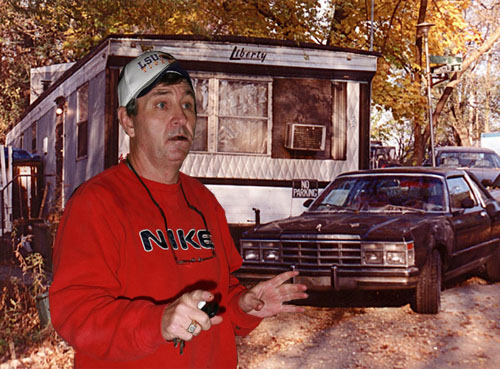 Britney’s dad outside his Alabama trailer earlier in the week

The Los Angeles area has been warned not to confront the crazed celebrity walking around talking gibberish with a fake cockney accent.

“She will probably run for the nearest Starbucks or drug store to buy laxatives and Red Bull. If anyone has any petite dogs, which are popular with celebrities, please keep them locked inside your homes. Do not confront Britney or offer assistance because you may be in severe danger – just dial 911 or run as fast as you can,” Officer Timpson from UCLA Police Dept. announced on the K-ROQ radio station last night.

Osama Lutfink, her manager, was fighting back tears at the thought of the pain and suffering poor Britney must be going through.

“I am a compassionate man and my heartfelt condolences go out to everybody who cares for her. We will restore her finances and accounts to their rightful place very soon — in my full control.”