Passengers on the Air Force One flight from Washington to London said the president was restrained after yelling and “invoking his God” while sitting at his presidential chair more than 30,000 feet above the
Atlantic.

The flight was forced to make an emergency diversion to
Ireland’s Shannon Airport early on Monday and the ailing lame duck president
was taken to a nearby psychiatric unit.

Alan Johnson, one of 43 passengers on board, said the president of the United States was
carried into the baggage hold with his hands and ankles cuffed after he was
restrained by cabin crew and one of his speech writers. The president was then handcuffed to a seat and fed more bananas to shut him up as the
captain requested permission to land from Irish air traffic
authorities. “He was worse than usual. Dick Cheney wasn’t even in the room and he was still talking to some kind of God,” Johnson told the Daily Squib. “His voice was clear, he didn’t
sound like he was as drunk as he usually is and he was swearing and asking for
God. He specifically said he wants to talk to his God.”

‘I am driven with a mission from God.’ Bush then shouted, ‘George go
and fight these terrorists in Afghanistan’. And I did. And then God
would tell me ‘George, go and end the tyranny in Iraq’. And I did.”

Mr
Bush went on: “And now, again, I feel God’s words coming to me, ‘Go bomb
the terrorists in Iran and cause a nuclear war, and bring perpetual war and pestilence on the whole world’. And, by God, I’m gonna do it.” 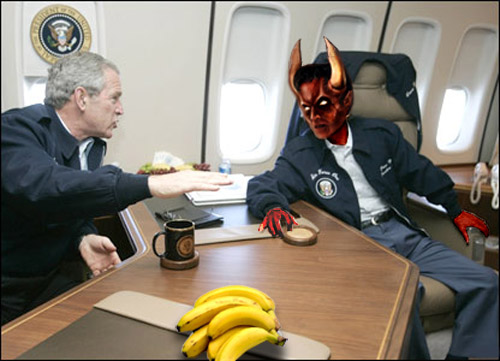 It
is understood that the crew first became concerned less than an hour before
they were due to arrive at Heathrow, when the president began “speaking
loudly to his God and acting in an even more peculiar fashion than usual”, according to one
source. The president was talking to his God with such lucidity that it even scared his handlers. The flight arrived
at Heathrow eight hours late.

An Air Force One spokesman confirmed that the flight captain had requested a “medical diversion” to Shannon.

“The president fell ill during the flight and the captain elected to divert
to Shannon,” he said. “The aircraft landed without incident. At no time
was the safety of the passengers or crew in question. The flight was
met by medical personnel and the president is now in care.”

A spokesman for Shannon Airport said: “We were advised that the president was unwell and that was the reason for the diversion. We prepared a cage for the president and his favourite bananas.”

Members of the president’s family including Barney the dog and a representative of the Pentagon flew to Shannon yesterday.

You can all rest assured that the largest nuclear arsenal in the history of mankind is in safe hands tonight.