The usually comatose fear index (VIX) has jumped 115.60% and is rising by the hour.

Stockbrokers are running around their offices scurrying like rats from a sinking ship!

Investors are getting the fear..like serious fear.

If Bitcoin can drop like a rock, why not legitimate stocks?

Maybe this is revenge by the hackers and dark netters after their Bitcoin high was spiked by various governments.

It only makes sense, if governments want to hurt Crypto, the hackers and users on the dark net will fight back.

Shit flies when the shit storm hits, and fear rises faster than it takes a margin call to liquidate your positions. 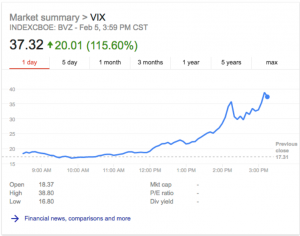 Sure, this could be a correction, hang in there, maybe even buy more, but what if it ain’t, you’ll be locked in as the stocks hit the floor, your once tidy profit now a worthless piece of shit.

Can you seriously watch the whole market drop while holding? No, siree! Better to dump, keep what cash you have.

There’s also the Democrats, obviously they are enjoying this every moment with avid appreciation at the destruction of the Teflon Don, but what if the Dems engineered this fall? Well, they’ll hurt their people as much as others, although the hierarchy will only see that as collateral damage, and a necessary evil.

Who frickin’ knows what will happen now? The fall is contagious as much as fear is, and it spreads like wildfire, it speeds up, accelerates and burns every corner of the global financial markets.

Some say we need to burn sometimes, but c’mon, it’s way better to ride the waves of a bull market than suffer the burn of a bear market. If you can short, that’s good for you, you should have been shorting from 26,000. Bully for you, you’re actually making a packet right now, and it’s going to drop further.

Silicon valley, the place where all the big geeks and companies live will be hit, we’re talking Google, Amazon and Facebook. Their fat smiles will be wiped off their faces as tech stocks smash into the ground leaving their once-upon-a-time billionaire faces nursing some serious smacked ass hole grimaces.

Come to think of it, the carnage is only just beginning and the VIX tells all. Two things rule this world, FEAR and GREED. The carrot or the stick. At this moment in time, that stick is beating down hard, and if you don’t get your money out, there won’t be a pension, there won’t be a nice holiday home, or a retirement fund, it will all be a dream people once had, and it’s all gone, like a sniff of the panties of that girl you had only once, never to be encountered ever again.