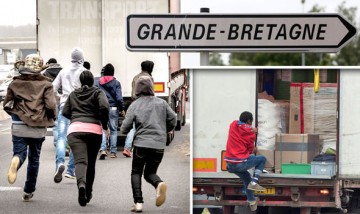 “It’s outrageous that a policy designed by our elected Government to create a level playing field for hauliers is under threat from unelected bureaucrats in Brussels. Much like our borders and our economy, a decision over this issue will not be made by the people we elect, but by EU judges. The bill families face from the latest EU meddling is on top of the £350 million we already hand to Brussels every week. If we want to take back control of our economy, our democracy and our roads, we must Vote Leave on 23 June.”

The Commission has today formally threatened to take legal action against the UK over the HGV levy, claiming it is incompatible with the ‘single market’.

In a ‘reasoned opinion’ delivered to the UK, ‘the Commission has today set out its concern that the HGV levy discriminates against non-UK hauliers’. The UK will have two months to respond before the Commission formally launches infraction proceedings against the UK .

The Commission claims that it is acting to ‘protect the EU’s Single Market‘. If infraction proceedings are launched, the European Court is likely to declare the UK’s legislation to be incompatible with EU law.

The Government has championed the HGV levy, which was introduced in April 2015.

According to the Department for Transport, ‘Government has introduced a road user levy for heavy goods vehicles (HGV) of 12 tonnes or more. The aim of the levy is to ensure these vehicles make a contribution to the wear and tear of the road network’.

On the introduction of the levy, the then Roads Minister Stephen Hammond (who is supporting the remain campaign) said: ‘Every year there are around 1.5 million trips to the UK by foreign registered lorries but none of them pays to use our roads, leaving UK businesses and taxpayers to foot the bill. In contrast, when UK hauliers travel abroad then in most cases they have to pay to use the roads. This new act will help the UK logistics industry remain competitive by making sure that operators from abroad are paying towards the cost of building and maintaining the UK’s roads as well as creating a level playing field for domestic operators’.

If the European Court agrees with the Commission, the UK could be left facing a £93 million bill with interest, more than the cost of a brand new hospital.

In its first year of operation, the HGV levy raised £46.5 million from foreign-registered vehicles.

This is enough to pay for 14,991 state pensions or child benefit for 86,399 children. It is more than the new West Cumberland Hospital in Whitehaven, which opened in October 2015 (cost: £90 million).