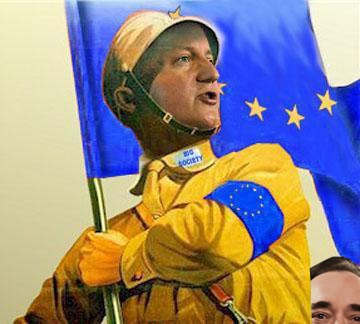 The EU is no doubt behind Salmond and Scotland, as the plan is to portion off the UK, divide and conquer, a technique employed by the British Empire now being utilised against itself.

As the engineers of Scottish Independence, certain unelected technocrats in Brussels are now rubbing their hands in glee at the thought of the EU taking the UK bit by bit.

The Daily Squib wrote about the consequences of the Scottish referendum in 2012 and Cameron’s fake tears do not fool some who can see through the plan.

Eventually, after a while, England will capitulate to the EU, especially when they see Scotland and Ireland getting all the goodies. The Celts, who one would have thought valued their freedom are nothing but slaves under EU rule, however they do not seem to care as long as it means sticking one up to the English.

The Great British Pound, under the auspices of David Cameron and Brussels has its days numbered, because once Scotland adopts the euro currency, the GBP will lose its standing on the foreign exchange markets.

The global elite are always ten steps ahead of anyone else, and it is to this effect, that they are using the Scottish ruse of nationalism to conquer that nation from the inside. What better technique of conquest than to use the Scots to take over their own nation.

If Scotland however opts to stay in the UK, then Ed Miliband will bring the UK into the euro currency.

Either way, it is check mate and there is no way to get out of it. No one can win against the superior strategic qualities of the global masters, especially when there are so many who are under their pay.

Cameron, himself will be keyed up for a top job in Brussels as will Miliband once he finishes his prime ministership.

Hail the Fourth Reich, a conquest so complete that not one bullet was fired.