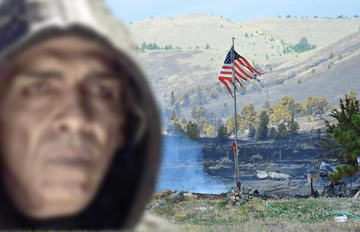 President Obama has made another speech revealing his plans to destroy the heart and soul of Midwest America.

“First of all, I hate cowboys. I want every cowboy wiped off the face of our land. You stand for everything that is against my socialist values. You are in my sights, and I will destroy you all bit by bit, rest assured I will not stop until my mission is complete. Once I completely purge the American heartland of its cowboys, the whole country will bow to the Obama doctrines and tenets I staunchly stand by. You stand for America, well I don’t want that. My job is to destroy America. You stand for gun ownership, well my job is to disarm you. You stand for family values, well my job is to destroy that. You stand for your Christian religion, well my job is to destroy that. I will take your cattle, I will take your land, I will force homosexual values down your throats, I will force you to watch Ellen DeGeneres shows on a constant loop and I will force you all to participate in same sex marriages, but most of all I’m banning Country music from America permanently and replacing it with black rap music. I will complete my mission to cleanse America. You will be told what to say and what not to say, you will be banned from wearing your filthy cowboy hats, you will be forced to adhere to my socialist Marxist doctrines of collectivisation, you will be assimilated into the socialist hub of the new America, the new socialist America where we want the whites to sit at the back of the bus, you had your chance, and you will comply or we will destroy you completely,” a defiant Obama said at his most recent White House speech.

President Obama has ordered Senator Harry Reid to spearhead the purging of America’s heartland which has been sold to the Communist state of China for a pittance.

“We gave your hard fought land to the Chinese for not much money. They own that land now, so be gone from it. Throw down your mangy dawg cowboy hats on the floor, because this ain’t your land any more. Now go on git, you two bit loser ex-cowboys. Find some other place, that ain’t in AmeriChina. How about you go to Guatemala,” a laughing Harry Reid said as he spat on an American flag and used his boot to grind it into the dirt.