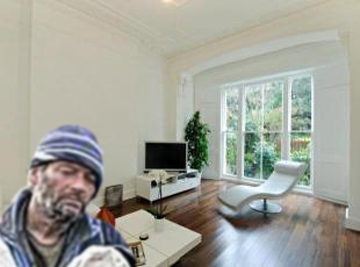 Rupert Denton, 45, an architect from Highgate had lost his remote control and lifted his sofa up to find the Bulgarian man staring at him.

“It was an extraordinary impasse. I told the startled man washing his feet with my designer napkin to get out from under my sofa and he spoke in some weird lingo. I am at a loss at how he got into my £2.6 million bijou moderno apartment but I bet it’s the bloody EU and their free roaming edict that did it. I immediately grabbed a broom and turfed him out of my place in no time. Turns out he mistook the underside of my sofa for Sofia the capital of Bulgaria,” Mr Denton told the BBC.

Mr Denton was set to have house hunters around that evening and really needs to sell his tiny half a bedroom £2.6 million cupboard sharpish, it certainly would have put a damper on things if a Bulgarian beggar suddenly appeared from under the sofa.