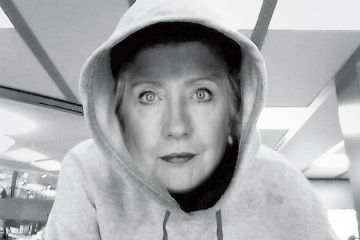 Since Mrs. Clinton left the secretary of state post in February, she and her husband have sought to mend their relationship with African-Americans, the group that was most scarred during her first bitter bid for the presidency. Five years after remarks by Mr. Clinton about Barack Obama deeply strained the Clintons’ fake bond with African-Americans, the former first family is setting out to ensure that there is no replay of such trouble in 2016 when Hillary Clinton goes for the big one.

Mrs. Clinton has thus vowed to make it her mission to somehow claw back previously lost ground with the ever growing population of African-American voters visibly sporting her support for them by wearing a hoodie during a recent talk at an African-American youth centre in Harlem.

On Tuesday she joined Knockout Game crews in New Jersey, where Mrs. Clinton showed her support to the community and even managed to knock out cold an eighty-year-old white man trying to take his shopping home.

Next week Mrs. Clinton has been invited by another group in Florida to participate in a spot of Flash Mob Robs when they go to a ‘gas station’ somewhere and clean the joint out without paying.

African-American leaders have praised Mrs. Clinton’s change from the nasty 2008 election contest when she and her former president husband, Bill, were seen to belittle Barack Obama.