In scientific reality, viruses can be engineered in laboratories, they can be altered, they can be weaponised. Scientists have been conducting these experiments for years. It is therefore not a conspiracy theory that scientists have been creating and engineering new variants of viruses for some time. In this life, and crazy world, one should not cancel anything out because there is a distinct possibility that the Covid, and Omicron virus were tweaked in laboratories, then released into the population. The CCP (Chinese Communist Party) have been boasting about their prowess in the field of virology for decades, especially with the world renowned Wuhan centre of Virology, where the first outbreak occurred in 2019.

One initial observation of the new Omicron virus is that it appeared suddenly with a vast amount of mutations not directly correlating to the other Covid mutations. This is suspicious, because the perfect nature of Omicron is almost too perfect, as if it were engineered to be this way.

Notice that Omicron makes a sudden appearance inconsistent with the other variants, and contains the largest number of mutations

Appearing originally in Botswana, and then South Africa, the Omicron virus could have been deliberately released in Africa to deflect any relation to China, however the CCP’s Belt and Road Initiative is heavily proliferated in Botswana amongst many other African nations. The Belt and Road Initiative has carved up large swathes of the African continent, because the Chinese need the prevalent raw resources mined from African nations. Effectively, the Chinese utilise a smoke-screen to fool African leaders that they will improve their country’s infrastructure by building roads and railways, however this comes at a large cost for the African nations, especially after all their natural resources are suddenly siphoned off and sent to China’s monstrous manufacturing industry.

This time around, the Chinese did not want to be implicated, so they released the virus in Africa, knowing very well that it would spread to the rest of the world within weeks.

Well, here we are now with Omicron spreading like wildfire in the UK, US, and Europe as well as multiple African nations. Granted, at the moment there is little data to suggest if this Omicron virus is deadlier than the Covid-19 SARS strains, however there is one thing we can ascertain, and that is the spread factor of this new virus is astounding. One could postulate that it is only a matter of time before Omicron begins to mutate naturally to become deadlier than anything else ever encountered in human history. The Omicron virus is therefore a perfect new base for even deadlier mutations, as it constantly tries to circumnavigate the body’s immune system. 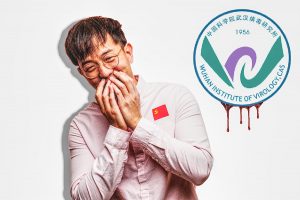 The CCP’s goal for the past forty years has been to first industrialise; its goal to become the world’s factory of cheap goods, its second plan was to militarize at speed with the aid of Western money and stolen blueprints. Thirdly, imitating Sun Tzu, destabilise the West and entire globe through any means possible, either through economical means, infiltration, propaganda (Black Lives Matter, #metoo, ANTIFA) as well as engineered viruses (Wuhan, Botswana).

The ultimate goal as espoused by Xi Jinping is a global China, and through dispersion of a virus which weakens the enemy, eventually leading to the collapse of entire nations, will leave China in a beautiful sweet spot to simply walk in to other countries taking them over. This can be accomplished using the ruse of a saviour, or a helper, however once China moves in to a territory, it will never leave. Once within any weakened nation, China will move its military in to take over with little or no resistance.

The China Standards 2035 plan is an all encompassing global programme to take over every nation in the world. The CCP is hoping that the viruses they have released will depopulate/destabilise many nations so that the Chinese people can eventually move in.

One can eventually imagine global cities like London, Paris, Rome, New York, Tokyo, Sydney, Moscow, all populated solely by Chinese people in the not too distant future.

We must also remember that Omicron is a test virus. As of yet, the virus does not cause too much lung damage, but is over 70% more infectious than the Delta variant. The Chinese scientists wanted to first create an extremely infectious pathogen, then after that point analyse the infection rate data. They did not want to make the virus immediately deadly because this would make other nations suspicious. The next stage for the scientists is to engineer and release an extremely infectious and ultimately deadly virus, which will also mutate of its own accord whilst shutting China down from the rest of the world. The Chinese have shown their efficiency in containment and as a communist totalitarian state, they have the ability to instate Draconian rules that the Western countries cannot tolerate.