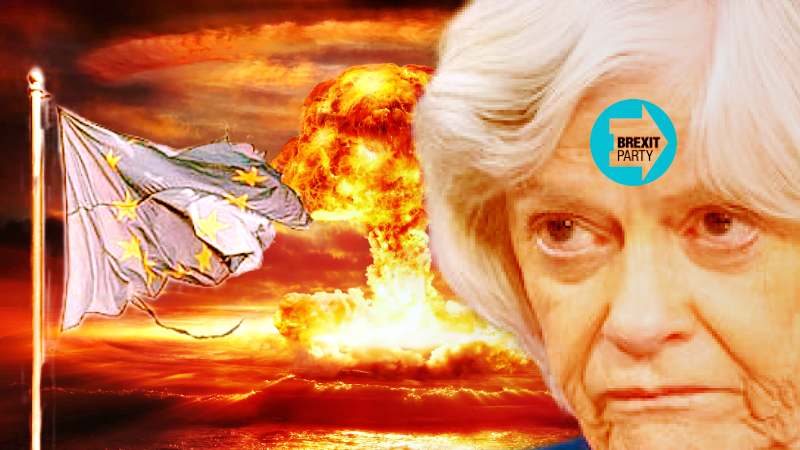 If you want to bring out the big guns, the Howitzers, the napalm, forget about that, the Brexit Party just went nuclear, cue Ann Widdecombe.

This former MP was a Tory party member for a whopping 55 years before defecting to the Brexit Party to defend the mantle of democracy and sovereignty in Britain.

The Engineer, as we call him at the Squib, Nigel Farage, is a genius politician who has now rallied some big names into the new Brexit Party and has gained major voter support as well as funding.

As the Conservatives flounder aimlessly under the pathetic cowardice and treachery of Theresa May, their polling numbers are in such low figures that it may now take decades to recover all the ground lost with voter sentiment. May has not only abandoned voters, but Tory grassroots and much of the party, yet she is still supported by the Tory Remainer hierarchy who are as instrumental in the destruction of the Conservative party as May is.

The fateful date of the European elections on May 23 comes towards us like a speeding bullet, and many are itching to go to the ballot box for some serious punishment meted out on to the Tories, and Labour party.

One day, maybe Britain will rise from the ashes of treachery and cowardice, to look forward onto the open seas once again, to man the ships, and set sail to forge those lucrative trading deals. Until then, we are stuck with Theresa May, an insipid turd that refuses to be flushed down the toilet bowl into the sewer where she belongs.

Ann Widdecombe will be the one who takes the fight to the EU, and not of her former party who have abandoned everything it stood for — instead, she will stand up for Brexit and Great Britain.