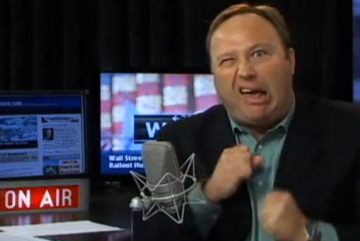 It is quite unprecedented to have Google/YouTube, Apple, Facebook and Pinterest wipe your site off their digital networks in a single day, all at the same time. This is what has happened to Infowars.

This accolade must be given to stalwart preacher, Alex Jones, and his Infowars site which seems to have infuriated (triggered) the socialist controllers of the ruling tech conglomerates who define all internet media today.

Jones is now a martyr and is claiming to be a free speech advocate, as is the normal behavioural response to such an all out purge.

What does this say about the culture we now have on the internet? Well, conservative views, and Christianity are a dying old world view, and there is little or no toleration for any of these ideologies anymore amongst the major tech companies.

The Squib disagrees with censorship and its use for political means, however, we alone cannot fight this because these nefarious tech companies control everything now. You can’t squirt a few globules of piss these days without hitting a Marxist controlled tech company. The lines are clearly drawn, and the tech companies are now fully in line with Communist China, who are masters of censorship.

You see, there may be conservative governments within the real physical world today, i.e. in the UK and US, but the internet has been completely hijacked by the communists. He who controls the media, controls the mind, as Mr Mojo Risin once said.

Facebook and Google are now aligned with Chinese communistic censorship ideals. Twitter is utilising a Marxist academic, Rebekah Tromble, to control their platform. The deeply left CNN, and sites like Buzzfeed, which we endearingly call Spamfeed because of it spamming the net with utter low quality shit at high rates of speed, are now also aligned with China, and its censorious dialectic.

The Squib does not subscribe to any political ideology however it recognises when political ideologies become apparent within certain forums, and the internet is now on the cusp of totalitarian socialist/communist rule.

The American socialist Democrat party have now in their outrage over the Trump election, aligned themselves with China.

What we have also interestingly observed is that hate speech is fine from the left, but not from the right. Not sure about the middle, but that’s another conversation. For example the recent appointing of South Korean anti-white activist, Sarah Jeong, who wants all white people to be killed. Seems strange, because there are many pale skinned South Koreans, but we know she meant the anglo-saxon type, so the New York Times hires her and nothing else is said.

Domestic terrorists, Antifa are celebrated on all social media outlets and their calls to kill Trump supporters or white men are promoted across all platforms without any censorship.

Double standards? Yes, of course, because the whole media is now controlled by people who actually despise themselves, and the America they live in. They want to change the country to subvert it and completely align it with certain totalitarian nations and the authoritarian communist ideology.

The Squib has outlined many times that all points of view to any conversation should be heard, and if you are offended, then simply look away, but to be offended in a conversation is not a crime, this is part of human discourse, and what these tech companies are effectively doing is removing human conversation, so that only one sided propaganda can be apparent. No doubt, the remaining conversation is now one of only socialist values and indoctrination into the global communist hive mind.

The American socialist Democrats are naturally also preparing for the 2020 elections as well as the 2018 midterm elections which will be held in November. By deleting one conservative voice, they are well on the way to eradicating all the others.

Goodbye Infowars, you have effectively been neutered, your channel will now suffer a drastic fall in revenue/views, and of course you will continue to rant and rave on, but to a limited, conservative white Christian audience on your website.

Are there ways of fighting back for Infowars? Yes, of course, but it will take money. Mr. Jones can start his own video streaming service, his own social network. These would of course be subject to no help from Google which controls 99% of the web. If Jones was to put his millions into building up his own network he may have a chance in the future. The other option is for the Trump government to punish these tech companies by making them pay the tax they truly deserve to pay.

Christians have lost the battle on the internet, their religion is now effectively snuffed out, pilloried and violated. That’s the only positive, however, how ever much we detest organised man-made religions, we still feel that they have a right to speech, and we would defend that right with our lives. The socialist tech companies do not think that way.

Remember, the Squib is just a mere observer, and a mirror of what is occurring at any time. We have no affiliation to any political party or ideology or race or huma-construct religion.