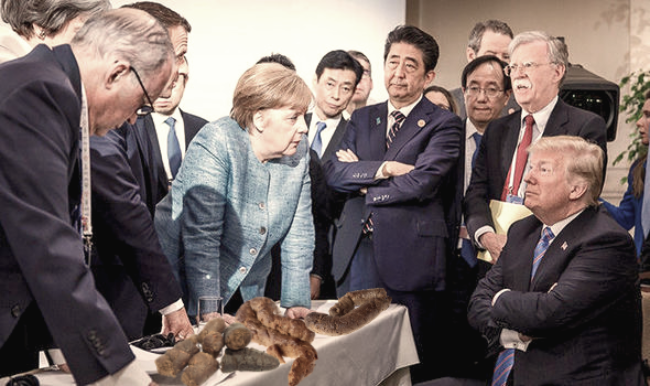 The President of the United States, Donald Trump was told off for doing a series of large shits on one of the G7 summit tables during a luncheon.

Much like a puppy has to be broken in, the summit leaders, Angela Merkel and French President Macron, along with Canadian PM Justin Trudeau told the American president off for his big smelly turds, which attracted large bluebottle flies into the luncheon room.

German Chancellor, Angela Merkel scolded the Donald for ‘doing a very very bad thing, mein gott!’ and even threatened to rub his nose in it as a lesson.

Watched by other G7 summit attendees, even the Japanese PM balked at the disgusting display, upturning his nose when the smell hit his nostrils.

The incident occurred during luncheon, when all the delegates were sitting at their tables, and the food was served.

“We had just been served the first course of celeriac risotto, toasted buckwheat, truffle, Chanterelle mushrooms, rosemary and celery leaf when Mr. Trump stood up, undid his trousers and pulled down his Y-fronts. He then positioned his large buttocks over the plate and these large turds came out of his asshole as he grunted with gusto. He seemed to find it pleasurable as his eyes rolled up showing only the whites as large pieces of excrement flopped unceremoniously onto the table and plate. The smell hit us immediately and some delegates vomited. Mr. Trump giggled like a little boy as he wiped his messy ass with the expensive cloth  napkins, even grabbing Theresa May’s napkin when finished with his one,” a shocked Canadian PM Trudeau recalled.

After the display, the delegates crowded around Mr. Trump to tell him off and tried to educate him in the ways of G7 summit etiquette.

“Mr Trump is a primal animal. This is the way he showed his displeasure, by taking a big shit on the table. It is obvious that he does not approve of events at the G7 summit, and what he also did was to designate the area as his territory, much like a dog does with urine and excrement.”

It remains to be seen whether Mr. Trump will be invited back to the next G7 Summit.