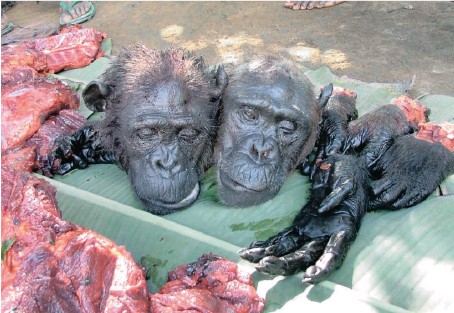 UPDATE: 25/1/2020 THIS ARTICLE HAS BEEN DEEMED AS CONTAINING ‘SHOCKING CONTENT’ BY GOOGLE AND ADS RESTRICTED. THIS IS CORRECT, THE CONSUMING OF BUSHMEAT IN AFRICA IS SHOCKING, AND THIS FACTUAL REPORTAGE SHOWS JOURNALISTIC INTEGRITY IN BRINGING FORTH THIS SHOCKING SUBJECT FOR THE PURPOSE OF CHANGE FOR GOOD, AND NOT FOR ENTERTAINMENT OR SHOCK VALUE PURPOSES. THE CONSUMING OF BUSHMEAT IN AFRICA IS A SERIOUS ISSUE WHICH IS NOT ONLY ILLEGAL AND TERRIBLE FOR ENDANGERED WILDLIFE BUT A CONDUIT FOR THE SPREAD OF VIRUSES AND DISEASE. THIS IS A SERIOUS PROBLEM THAT NEEDS TO BE BROUGHT INTO THE FORE WITH AWARENESS SO IT CAN BE STOPPED. WE STAND BY OUR DECISION TO CONTINUE WITH THIS ARTICLE AS A POINT OF JOURNALISTIC AWARENESS OF A REAL PROBLEM THAT COULD CAUSE A WORLDWIDE EPIDEMIC OF EBOLA AND OTHER COMMUNICABLE DISEASES WHICH ALSO CAUSES NEEDLESS DESTRUCTION OF THE NATURAL ENVIRONMENT AND ANIMAL SPECIES. WITH THE CURRENT CORONAVIRUS PANDEMIC DUE TO THE CONSUMPTION OF WILDLIFE IN WUHAN CHINA, THIS ARTICLE AND ITS SHOCKING CONTENT IS EVEN MORE PERTINENT.

He said one sample proved positive for the deadly Ebola virus.

Ilunga said Congo now is entering an urban phase of the outbreak, with higher spread potential. He said epidemiologists are working to identify additional contacts to the 500 already identified.

One would have thought the people and authorities in Congo would have learned that the eating of bushmeat is a cause of the spread of Ebola, but many have not heeded any warnings.

Bushmeat is still a staple diet of many Africans, even though there is solid scientific evidence proving that deadly pathogens are spread into the human population from ingesting bushmeat.

In the Congo, bushmeat consists of monkeys, crocodiles, antelope, snakes, gorillas and bats. Bats carry highly infectious pathogens and are one of the primary causes of the spread of Ebola.

With international travel, and a steady flow of traffic from the Congo to Europe and other destinations, it is only a matter of time until the spread of any infectious tropical virus like Ebola spreads.

The symptoms are not seen for some time once infected, 21 days is the usual incubation period. This is why it is easy to take a flight to Paris, France from the Congo with no problems. During the flight, the infected passenger may infect many more passengers simply through a sneeze or cough. Water droplets carry the virus with little effort, and the victim ingests the droplets either through the nasal passage, mouth or even pores in the skin.

Thanks to the EU Schengen zone, the spread of Ebola throughout the European peninsula would be quite quick unless contained early.

Already, many illegal migrants from Congo, Eritrea, and other parts of Africa make their way towards the crossing from Libya onto Italy.

It is safe to say that Italy would become ground zero during a major Ebola outbreak as the number of migrants making the treacherous crossing in boats is rising daily.

The Ebola virus is transmitted by bodily fluids, and even after being cured, the virus exists in semen for three months, therefore it can be transmitted far and wide.

Death from Ebola is usually extremely painful as the internal organs are eaten away and massive internal bleeding occurs shutting down the whole system.