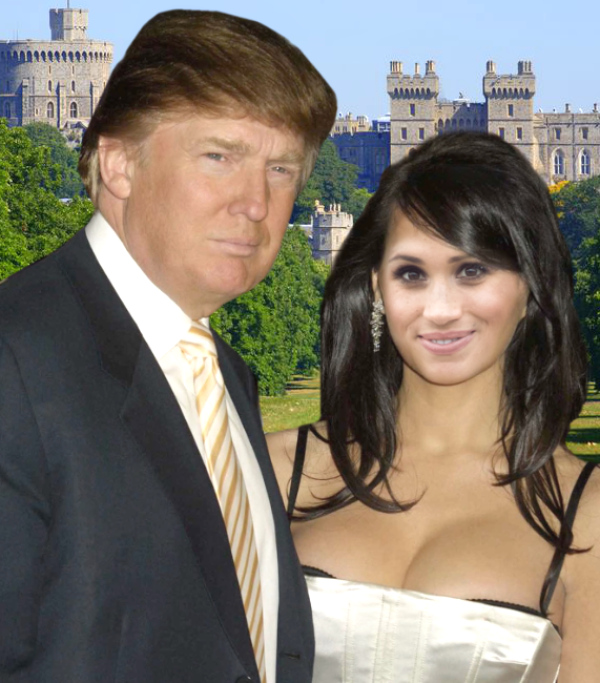 With the sad meanderings of Meghan Markle’s ailing father and family, as well as the announcement today that he will not be presenting his daughter to the prince at the royal wedding on Saturday, the President of the United States, Donald Trump has stepped in.

“I have been following the news and have spoken to the prince and Meghan. It would be an honour for me to walk the soon-to-be princess down the church aisle,” President Trump said from the White House.

Donald Trump, ever the diplomat, has recently been persuading Kim Jong-un to drop his nuclear armaments, that is until that John Bolton idiot stuck his fat nose into everything and fucked it all up. Nevertheless, with all this toing and froing, the president will find the wedding a calm interlude to his otherwise busy schedule.

It is not a certainty that Melania will attend as she herself has recently undergone surgery and is recovering.

White House aides are also considering a surprise visit to Windsor on the wedding day, unannounced.

I don’t like to see beautiful women in distress. Instead, I just grab ’em, grab ’em by the …

Jerry Fleischer, senior White House organiser told CNN: “What better wedding present for the royal couple than the U.S. president landing on the Windsor castle lawn in Marine One.”

As there will be no catering or food at the royal reception, there will not be any need for an extra plate for Donald Trump when he turns up out of the blue.