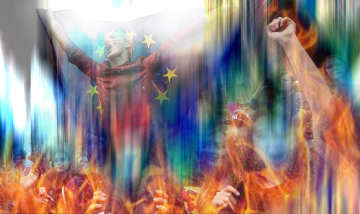 At the moment, there is a vast media push where Remainers, or Remoaners are given a voice to downgrade Britain, to put forward their anti-Brexit agenda, and to derail any form of political progress with the current EU negotiations to leave.

This is a deep-state exit emergency where the media is being utilised to effectively sell Britain down the EU road. When you have councils given the go-ahead to increase tax by 40%, when you have the taxman punishing entrepeneurs who backed Brexit, when you have the media giving Remainers centre stage access to full-page articles to spread their pro-EU bias, you know for certain that this is another wave of attack on Brexit.

The concerted attack on leaving the EU is being conducted from within the British state, and is being directly advised from Brussels.

In days of past when people in government actually cared for Britain and its world-standing, Remainers would have been viewed as traitors or as conducting treason, however, because many have taken large pay-offs from Brussels, they no longer hold allegiance to the UK. It is purely a monetary issue for the Remainers, they are willing to betray their country for money.

For those of you who voted in good faith on June 23, 2016, to leave the EU, unfortunately, the people’s vote has been sidelined. The opinion of the people is of no value to the traitorous scum Remainers paid off by Brussels. These people are embedded in the highest echelons of all state departments, the media, and orchestrate their agenda with timed precision, backed by the government departments state.

The people effectively have only one voice, that is the sound of their feet. Referendums do not work because they are counteracted by the controlling body after the vote.

Either there will be another concerted vote by the people (including the silent ones) in the next election, which is now possibly going to be delayed till 2022) that will usher in a true Brexit force, or we have the other option which is the ultimate solution — complete civil unrest.

Treachery is always eventually punished, especially on those who seek to rob the people. One can only hope for the glorious day when Remainers are given their just desserts for abandoning their country for payoffs from Brussels. These parasites should be given no mercy, their treachery consigned to the lamppost they swing from.