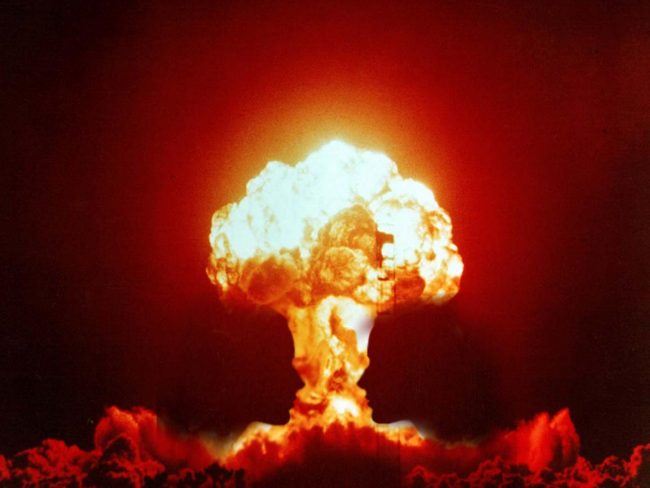 Kim Jong-Un set up an amazing fireworks show for the people this new year with an amazing explosive extravaganza that wowed everyone.

The 200 megaton explosion flattened much of the capital city, Pyongyang, and spectators were in awe for approximately 2.3 seconds before being vapourised by the bomb.

Dropped directly onto the Juche Tower monument as fervent broadcast announcers ushered in the new year, the explosion was viewed from space by astronauts in the International Space Station.

“They’re having one hell of a new year in North Korea,” one astronaut quipped whilst sipping vodka from a bag.

Speaking on North Korean state television just before the detonation, Kim Jong-Un spoke utter gibberish and was sporting a floppy cowboy hat with a large peacock feather stuck on the top of it. Frothing at the mouth, he was speedily ushered into his private bunker by senior state officials and army personnel.

Unfortunately the radiation cloud created by the North Korean firework is drifting towards Japan, however scientists say that the Japanese are all irradiated anyway, therefore a little more won’t hurt.

On hearing of the firework, U.S President, Donald Trump said:

“I told that boy not to play with fireworks. Looks like he’s gone and nuked his own capital city. Dang, I wanted to do that, the SOB beat me to it.”