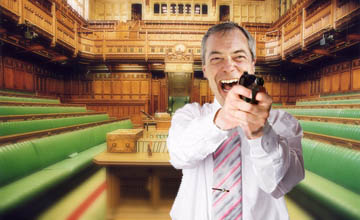 Nothing sickens the palate more than to see a seemingly eloquent politician moaning about something he has stood back from and watched from afar.

Cue, Nigel Farage, a man whose vision and sheer will power made the administration of former PM David Cameron agree to a Referendum on whether Britain should stay or leave the EU.

If it was not for Nigel Farage there would never have been a referendum, and never a vote to leave on June 23, 2016.

Unfortunately, the referendum was the beginning, yet, instead, Mr. Farage abandoned his party, and went on walkabout. Yes, he is an MEP, however he has not had an instrumental role in the Brexit since June 23, 2016, where it all ended for him.

Now that we have the massive capitulation to every Brussels demand by current Tory PM, Theresa May, who has effectively tied the UK to the EU until 2021, and beyond with the ECJ diktats. What is Farage doing?

Farage is still out of the loop and moaning about the terrible deal Theresa May has given, in which Remainers are jubilant about.

First off Mr. Farage, what the fuck did you expect? We have a Remainer PM, a Remainer Cabinet and a Remainer Chancellor. What the hell do you expect them to do? In no uncertain terms, it is only natural that they appease Brussels simply because they do not want a Brexit and never have. Where are you Mr. Farage? Where the fuck are you?

Talking on LBC? WHAT’S THAT GOING TO DO? You guessed it, absolutely nothing.

The only course we can see is that you come back to Blighty, either start a new party or re-join UKIP. That is the only way you can save Britain, and you better do it sharpish because things are getting worse and worse every day.

Because of Theresa May, the Tory party has failed Britain immensely and are stained beyond repair. Another party has to come and clean house.

So, Mr. Farage, undoubtedly you will never read this, but stop faffing around and watching the boat go by, because soon it will be too late for any action.

The next General Election will be held in 2020 or earlier, this will be the final say on Brexit, and the so-called Conservatives will lose at the rate they are going.

We are now on a war footing, this is war, this is combat, this is it..

DO IT! You must do this now because no one else will.