“We had 950,000 swimmers on this stretch of coast last week and they all jumped into the water at the same time. I do not think, however, that this could have caused the earthquake resulting in a tsunami,” Mr Long remarked whilst being interviewed on state television.

The population of China is so huge that when swimmers go to the beaches, seismologists record tremors and if the activity continues along fault lines, there can be serious repercussions resulting in massive earthquakes and tsunamis.

“It’s not only the risk of creating earthquakes and tsunamis that people should be scared of, what about when thousands of Chinese bathers all take a wee in the water at the same time? We’ve actually tracked the yellow slick by satellite reaching as far as California and Hawaii,” Roger Bannister, a seismologist and scientist from the University of California told CNN. 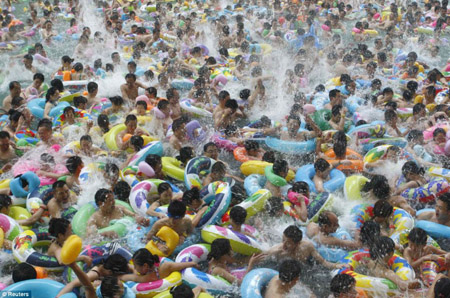 When the Chinese bathers all jumped into the water at the same time and started to splash wildly last week, there were reports of 80 foot waves reaching the coast of Africa and India as well as tsunamis in Japan and Korea.

“It’s those darn Chinese again. They must have been all going for a swim. Can you imagine when they all want to own a car as well? There’ll be so much lead and pollution in the world’s atmosphere that Japan’s radiation will be a breath of f*cking fresh air,” a South Korean politician, Kinji Asso, told South Korean news agency, Yonhap.