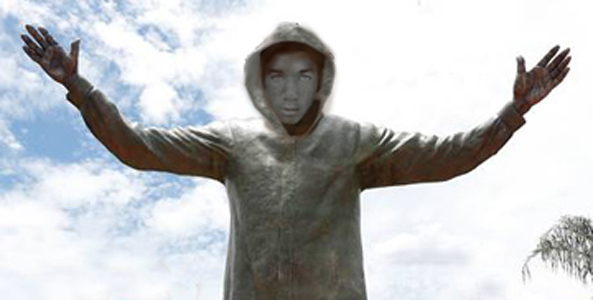 After all the Southern states of America have been purged of their historical statues, the Soros founded foundations and infiltrated city officials have agreed that each spot where a Confederate statue used to be, should be filled with a Trayvon Martin statue.

Giancarlo Fuccini, renowned Italian sculptor was commissioned by the group who have taken over the City council to sculpt the piece of the angelic Trayvon, as a symbol of ‘peace’.

“I had a few reference photos of Trayvon, as he was such an angelic peaceful character, but instead chose to sculpt his likeness in the form of Jesus, coming back to us and preaching peace and goodwill to all men,” Fuccini revealed on Monday.

The 100ft statue will preside over the pulled down General Robert Lee statue, after it was defaced and pulled down so unceremoniously last week by communist thugs on another one of their rampages.

Costing just under $52 million, the statue came under budget, and residents of Charlottesville were all too happy to foot the bill.

“My state taxes just rose by 40% and this year we won’t be able to afford to heat our home, but I don’t care, as long as we are all politically correct and abide by the communist factions dictating to us on what we should or should not keep from past history, I’m happy,” resident Albert Collins, 52, told the local newspaper.

The Southern Poverty Law Center, SPLC, a 501(c)(3) tax-exempt foundation head quartered in Montgomery, Alabama, is pushing for major changes to all historical statues that do not agree with its hard left agenda. Funded by George Soros, the SPLC has even recruited tech groups like Apple, Google and Facebook to police its heavy censorship, politically correct soviet agenda of complete erasure of history online as well as offline.