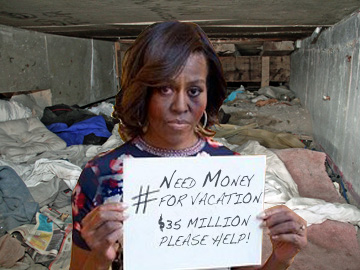 Long gone are the wasteful days of $100 million vacations, or Air Force One flights to a function 20 miles away costing taxpayers hundreds of thousands of dollars in fuel and maintenance costs.

After the Trump win something changed in Barack, here was his legacy at risk of being wiped out completely. Obamacare, Obamaphones, Obamafreebies, Obamatoiletpaper, Obama this and Obama that.

“He’d come home and say the ‘gibsme’ culture is gone, now whitey ain’t ‘gibsing’ any mo. He was depressed. Here we had ransacked everything that whitey had and then they say we had to vacate the White House. Barack fell into dark times, he didn’t even wanna play golf no more, instead he got the secret service guys to score some crack or meth. The dream was over, our liberal progressive Marxist ideology had been ruined by one man – Trump, and that dumbass white bitch Hillary who couldn’t win a prize in a prize factory,” a woeful Michelle told our reporter.

The road from the White House back door is a long one, and already Michelle is stalking the streets of D.C. trying to find a good cardboard box to maybe make home once again. If you staple a few cardboard boxes together you can add waterproof tarpaulin over the top to make it more habitable, especially in winter.

It has only been a week or so since they moved, and already Barack has spent all the money the family had on drugs, he even sold some of Michelle’s dresses and trannie straps used to keep her male genitalia as flat as possible under garments. With no money, the kids left and are now staying with their boyfriends.

“I don’t see Barack much, only one or two time a week. The meth he is smoking already rotting his teeth, and he get all violent with me but I is bigger than him and the other day beat him so hard his last tooth fell out. I said serves him right. But he says he wants the same high as being in the White House. He’s searching for that thrill of ordering white people around. He just can’t find it, and when I told him, I said it was all an illusion. He was just a nigger then and he’s just a nigger now. Nothing changes. Having a nigger in the White House don’t mean you ain’t a nigger any mo, it just mean they put one us in there as a token. Ain’t gonna happen ever again.”

It’s Monday, and the Trump Inauguration will happen this Wednesday. What does Michelle think about that?

“Pfffft. It’s offensive. Trump is offensive to me. Here I am in a cardboard box under a bridge and that ass wipe is the new prez. Maybe I should run in 2020. I want my dresses back, I want my useless initiatives back, I want to ruin school meals again, I gots me ambitions for mo multimillion holidays. By that time don’t know if Barack will be around anymo? Who cares any way, I’m more man than he ever was, I can do this.”

As the rain pitter patters down in the freezing cold, Michelle pulls out a placard and begs for money. It’s another day in downtown Washington D.C. , this time not from the comfort of the White House but a cardboard box under a freeway bridge.