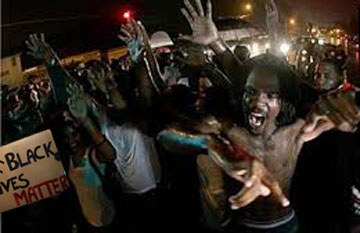 Most blacks die from being shot by other blacks, and their lives don’t seem to matter.

It’s only when a black is shot by a white policeman that his life seems to have some worth amongst the black community and left wing activists.

LaQuan DeShawn III, a gang member from Chicago revealed: “A black person’s life is worthless in America unless he get shot by a white cop. I could go out into the hood right now and shoot three or four niggas. Black Lives Matter crew would not want to know. I could call ’em up and show them the video, they still would not want to know. That’s because a, I’m black, and b, I ain’t a white cop.”

The Soros funded BLM group are only interested in blacks who die at the hands of white policemen, they are not interested in the fact that black on black crime is by far the largest element of national statistics.

It is this inherent hypocrisy which defines Black Lives Matter, and all the other offshoot left wing groups.

By only singling out a very small minority in black deaths, groups like BLM relegate all other black deaths to nothing.

Over the past 35 years in America, an estimated 324,000 blacks have been killed at the hands of fellow blacks.