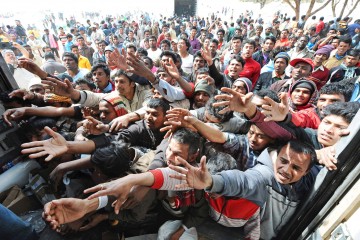 Theresa May said reforms to free movement are needed, stating ‘I think again as I’ve said that we should look at further reform in the future‘.

This contrasts with what the George Osborne said earlier. Interviewed on the BBC Today Programme Osborne was asked whether there was ‘anything more to offer in terms of controls on freedom of movement’. He replied ‘the short answer is no’, before going on to try to argue that migration could be brought down through welfare controls.

‘The IN campaign are in a complete mess. Not only are they divided over whether or not to talk about immigration, they are deeply split when they do.

‘David Cameron and George Osborne are adamant that there is no need to change the freedom of movement rules, while the Home Secretary says that they need reform. Jeremy Corbyn can’t agree with his own Deputy Tom Watson.

‘No wonder the public don’t trust the Government’s commitment to bring migration down to the tens of thousands. The only way to get back control of our borders – and introduce an Australian points based system – is to Vote Leave on 23 June.’