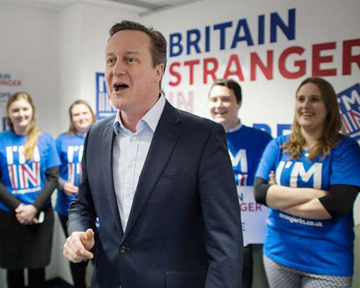 In a joint statement they said:

‘The real risk for Britain in this referendum is voting to remain in the EU with a broken single currency and a rogue European Court. The safer choice is voting to leave, so we can take back control of our money, borders, security, trade and taxes.

‘If we needed a reminder of just how risky it is to remain in the EU, the European Court has today issued extraordinary judgements that undermine our ability to deal effectively with asylum.

‘We think that the public deserve the chance to hear these issues debated face-to-face between the Prime Minister and a spokesman for Vote Leave so they can judge for themselves which is the safer choice on 23 June. The Prime Minister was absolutely right to hold this vote and allow Ministers the chance to disagree with him. We hope that in the same spirit he will accept this invitation.’