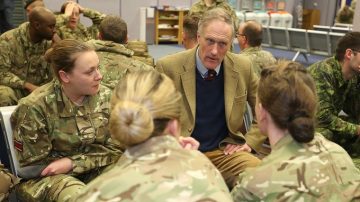 Speaking at a debate with Shadow Defence Secretary Emily Thornberry MP at RUSI, Mr Brazier will highlight how it has been NATO – rather than the EU – which has kept the peace in Europe, and that decisions by the European Court, and uncontrolled migration weaken the UK’s ability to keep its citizens safe.

Mr Brazier points out how the forerunner of the current troubled Eurozone, the Latin Monetary Union from 1864 – 1927, set the economic context for the origins of the First World War in the Balkans and Southern Europe:

Prosperity is a friend of peace … poverty drives discontent. So, rather than stabilising Europe, this early attempt at monetary union helped to create the unhappy economic conditions which contributed to Europe’s slide towards the First World War.

It is NATO, underpinned by American military might which has kept Europe from another war after 1945 – not the (then) EEC.

Mr Brazier gives examples of how EU legislation undermines our forces at the working level:

‘If you ask any young officer today, what is the worst part of the job, it is endless paperwork.

‘Military drivers are subject to EU mileage limits… so exercises have to be planned around this constraint… sometimes have to stop altogether if limits are broken.

‘Again…all civilian posts have to be advertised to meet EU regulations. So imagine … the top expert in some branch of aviation technology has just reached his 55th birthday and wants to continue as a civilian.  MoD cannot simply re­employ him. His job has to be advertised, shortlisted and filled… sometimes many months later.’

‘… this reminds us of the way the EU sees defence… as another routine area for exerting bureaucratic control… rather than a vital and risky business.’

He will illustrate how this bureaucratic mind-set has failed in military crises in Europe:

‘First the two stage fallout from the breakup of Yugoslavia. The EU encouraged Bosnia to declare its independence from Yugoslavia. So where was it when the killing started and the Americans… understandably… said it was European business?

‘Slow off the mark while tens of thousands died… NATO had to pick up the pieces.

‘And again…when the West confronted Serbia over Kosovo, and the Serbs drove a million refugees out of their homes… EU countries queued up to say they were unwilling to put boots on the ground.’

Turning to the Ukraine crisis, Mr Brazier will describe how the ‘EU poked the bear in a way that was decidedly risky’:

‘…it was Ukrainian citizens who paid the price in Russia’s brutal reaction … And America was ahead of the EU in applying economic sanctions.’

On the prospect of further European integration in defence, he will say that it undermines NATO and is an unnecessary extra cost when defence spending is low across the EU:

‘This is just one more attempt to set up a structure duplicating NATO. Do we need more headquarters when European defence spending averages only 1.3% of GDP?’… At the height of operations in Afghanistan, many European NATO members were having difficulties deploying just dozens of troops at a time. Many non-NATO EU members barely deployed troops at all. Many of those who went were restricted by caveats, such as no flying at night or no combat patrols beyond a certain distance from a base.

Mr Brazier points to decisions by the European Court of Justice which interfere with the UK’s national security:

‘The ECJ is considering whether our proposal to build a mass surveillance database infringes European privacy rules. So European judges are to decide what information we need to keep our citizens safe. The same court ruled that we could not deport Abu Hamza’s daughter because his baby grandson had EU citizenship.’

Cases like this already threaten the exemption of essential security matters from EU override, and the surrender of our veto over other countries moving ‘forward’ further adds to risks of us being sucked into EU defence structures we oppose:

If the ECJ is willing to consider this case, despite the national veto on security issues, in Article 346, what else may we face cases over? The court has a long history of overriding states’ vital interests even ignoring pledges publicly made – those given to Denmark after their referendum on membership have been overruled 79 times. Who knows what will be next? Perhaps procurement of military equipment… the commission had a go at the Czechs over buying aircraft for operations in Afghanistan. Perhaps failing to participate in new structures set up by other countries within the EU?

‘As a 2014 brief from the EU institute for Security Studies put it ‘It is now crystal clear that Article 346 is neither an automatic exclusion of defence from EU Law, nor a provision limiting EU competence.’

Mr Brazier says that the UK will continue to cooperate with European partners in NATO and on an ad hoc basis on defence matters after we Vote Leave:

‘Of course, leaving the European Union does not mean ending valuable sovereign arrangements with our most trusted European allies…

… Because of course, besides continuing with all our other arrangements… from bilateral… to coalitions of the willing… to joint procurement projects… we will all remain members of the overarching structure of our defence and security… that is NATO.’

He will conclude that in this referendum, the status quo is not on the ballot paper:

‘A vote to remain is a vote for uncontrolled immigration and even more of our legislation dictated by Brussels, with a growing proportion affecting our armed forces and national security.

‘A vote to leave means we can take back control of our laws. We can continue trading with Europe but engage directly with the fastest growing economies in the world outside the EU. And… crucially… we can take control of our borders.