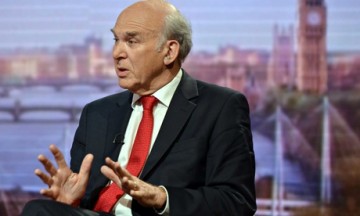 ‘Vince Cable has finally admitted what everyone in the country already knows – we cannot control immigration if we stay in the European Union.

‘A vote to stay in is a vote for unlimited EU immigration and further strain on our schools and our NHS, which will only get worse when we pay for Turkey and its population of 77 million to join the club.

‘It is only by Voting Leave on 23 June that we will be able to take back control of our borders and the £50 million we hand over to Brussels every day.’

Sir Vince Cable admitted that Michael Gove and Boris Johnson are right, that it is impossible to control migration within the EU.

On Murnaghan, former Secretary of State for Business, Innovation and Skills, Sir Vince Cable, admitted that the points made by Michael Gove and Boris Johnson on immigration today were ‘actually valid‘.

He said: ‘I think what was said this morning about the immigration target this morning was actually quite interesting – Mr Gove and Boris Johnson – I mean the Liberal Democrats argued throughout the coalition that it was not sensible to have a rigid immigration target that couldn’t be met. It isn’t just because of migration from the European Union. You can’t control emigration from Britain. I mean we’re not East Germany or North Korea and of course if you manage to reduce British emigration, if British people stay at home and work at home, of course you then make the net immigration position worse, so it was a foolish target to have met and you have got different groups of people, you’ve got asylum seekers, workers, families, overseas students, who are not actually immigrants at all, all in the same number and we urged them to drop this target because it wasn’t achievable, and they repeated it again in 2015, so I think the basic point that Mr Gove is making is actually valid in its own terms‘.

Michael Gove, Boris Johnson and Gisela Stuart’s open letter to the Prime Minister on migration was reported in the Sunday Times.

Sir Vince also slammed the Prime Minister’s campaign to do Britain down for its exaggerated claims.

Sir Vince Cable admitted on Murnaghan that ‘there is exaggeration‘ on the part of the pro-EU campaign.

Sir Vince also admitted: ‘I don’t expect we are going to get Armageddon either way.‘