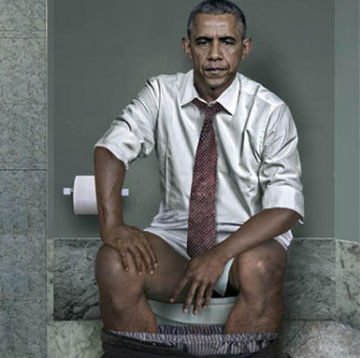 President Obama has fond memories of his trip to the UK to try and persuade the Brits to give up their laws, their freedoms and sovereignty to the EU.

“I had a great trip. As soon as I landed, some guy came up to me and said ‘Back of the queue!’ I said what? In the U.S. we say ‘line’ we don’t say ‘queue’. Then another guy came up to me, he said he was the PM or something. He gave me a piece of paper and told me to say those words to the BBC.

“Oh, ain’t that Prince George cute? I bowed down to him, and said ‘Massa what can I do you for?’ he just looked at me and rode off on his little horsie.

“Michelle and I got a ride from Prince Philip, you know the guy with the Tourettes. He kept telling me to mind my own business, and to take my TTIP and wipe my ass with it. I said ‘do you mean TP?’ He said no, the TTIP that you’re peddling and will kill the British welfare system designed to keep the oiks happy.

“Those guys at the BBC were great to me, they gave me my own talk, and I immediately phoned Brussels to tell them to up the funding.

“Oh, and I played golf with that Lord Haw Haw guy, whatsisname? He said I did good and I read the script fine. Only thing is I didn’t fool anyone, so now I must leave before I do’s more damage. I aksed him, what I did wrong? He said that the whole thing has now backfired and more people are going to vote Brexit because they don’t like meddling Kenyans telling them what to do. Then I aksed him why a lame duck like me would possibly make any difference anyway? Cameron gave me the silent treatment after that.

“Anyways, good to be back home. Plain sailing from now on till retirement. I’m just going to do what I did throughout my presidency. Play golf, take expensive taxpayer funded holidays, talk about gay rights and ignore everything else.”