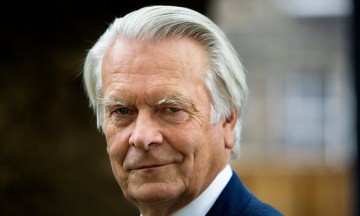 US Presidential visits traditionally do not occur close to elections and the British people are ‘puzzled’ that Obama is urging the UK to remain in a ‘dysfunctional’ EU, especially as the Eurozone is so close to ‘impending collapse’, Lord Owen says in his speech this evening.

“When you are a member of a dysfunctional organisation like the EU that can neither reform nor restructure you have two choices: either to reluctantly remain in the organisation or be brave enough to leave.  That is the choice that faces individual British voters on 23 June.

“There has been a long tradition that US Presidential visits to this country do not take place close to General Election periods. The reasons for this are obvious and hitherto scrupulously observed by Washington D.C. They also govern Prime Ministers visiting the United States.

“In the autumn of 1978 as Foreign Secretary I mused about possibly inviting President Carter to repeat his very successful 1977 visit to Britain before October 1979. In the event we had an election in May. But I was wisely reminded that there had been some criticism of the only precedent of a visit close to a likely election when President Eisenhower met with Harold Macmillan on a visit to Britain from 27 August – 2 September 1959 with an election being called for 8 October.  President Carter played these sort of issues by the book and so I quickly shelved the idea. There were correctly no Presidential visits by President Ford surrounding the 1975 referendum on coming out of the Common Market.

“President Obama’s first Secretary of the Treasury has used some very tough language about the Eurozone in his book Stress Test published in 2014. He wrote, ‘The second drag on our recovery was Europe, which was in financial and economic disarray,’ and ‘the European mess was a serious threat to us… The sudden panic in Europe was shocking… Now Europe was burning again, and it did not seem to have the tools or the desire to control the fire. The Eurozone was sixteen [now 19] nations with sixteen fiscal policies and sixteen banking systems‘.

“Geithner writes in words with which I totally agree.  ‘For all the flaws of the U.S. system, our fragmented regulatory agencies were at least part of the same nation, with a common language and traditions. And we routinely transferred resources to economically weak regions through our national budget.’

“Six years later, despite constant urging by Geithner and Jack Lew, his successor as Secretary of the Treasury, the Eurozone remains basically unchanged, though now practising quantitative easing under ECB Chairman Draghi.

‘No wonder many British people are puzzled, to say the least, why President Obama should, in the light of his and our failure to reform the Eurozone, come into the midst of our referendum campaign to urge us to remain in the EU, despite an impending collapse of the Eurozone which would impact far more on the UK than the US.

“The U.S. Defence Department for decades has been hostile to EU ‘common defence’ and to ‘autonomous defence’ in the EU as well as to having two planning centres for defence in Europe, one in the EU and one in NATO. That is no secret and a factual judgement which I and many other people in Britain share.

“President Obama in his recent interview for the Atlantic magazine, correctly, and in the view of many Europeans rightly, openly criticised us in Europe for ‘freeloading’ on the NATO defence budget. It is clearly not tolerable for the U.S. voters that they should pay 73% or 75% of the NATO budget. That direction of travel has got to be corrected and soon.  But it will not be done by the EU.

“While the EU is dysfunctional NATO is not. NATO would benefit today from a solely committed British voice not one hovering between it and EU defence. By the people’s choice, not its elite, Denmark is not part of some EU treaty language on defence. A core priority after Brexit must be for the UK to strengthen NATO and help improve the Alliance’s capability to act cooperatively to preserve peace and security including dealing with ISIL.

“President Obama is, I am sure, aware that his former Secretary of Defence, Robert Gates, records in his book Duty  that the then Secretary General of NATO, Anders Rasmussen ‘had shared with him his concern that Germany would not agree to any NATO action on Libya, mainly because it wanted the European Union to be in the lead.’  We also know from General David Richards, the then UK Chief of Defence Staff, that he ‘insisted in the National Security Council that any military operation in Libya had to be a NATO operation’ and that President Sarkozy was advocating an essentially Anglo-French operation ‘but we could not have done it with the French alone.’ As it turned out the handling of the aftermath in Libya was a failure which President Obama admits more openly than David Cameron. There are many lessons for EU and NATO to be learnt here. They also have implications for the UN. Russia and China, having abstained over Libya in the Security Council so the military intervention was legal, have been far less receptive to help over Syria in the Security Council apart from negotiations over sarin gas.

“In Europe we are sleepwalking in relation to security questions and the situation is not stable.  There is no shadow of doubt that all European NATO member states should now increase their defence budgets as agreed two years ago in their Newport meeting to 2 per cent of their GDP. Sadly, there is little chance that they all will, but at least the UK has committed itself to doing so. There should also in future be less talk about EU military defence in EU documents such as the EU–Ukraine Association Agreement, less talk about EU common defence, and a far greater European commitment to NATO, not just in words but in actions.

“Outside the EU, the UK has an unique opportunity to shield itself from a future collapse in the Eurozone by starting to negotiate global trading arrangements, improving our competitiveness and simultaneously demonstrating a greater commitment to NATO.”