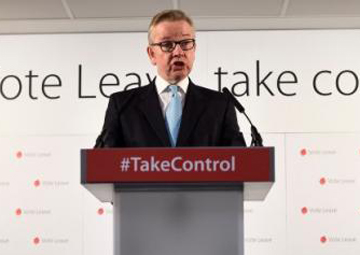 The EU referendum has been marred by the negative StrongerIn campaign spreading their woeful stories of disaster and impending doom upon the population, they have continued to put Britain down, to negate the people’s ability to think for themselves, in short, they have treated the people like children.

Lord Chancellor and Justice Secretary Michael Gove on the other hand, today gave a speech setting out clear grown-up plans for a Brexit, with a zing of optimism, we can do this, and Britain can regain its rightful sovereignty back from the faceless eurocrats who have been running things for awhile now.

There will be no volcanoes, if we Brexit, as StrongerIn seem to relate, there will be no earth opening up and swallowing whole cities into a mass of red hot lava. Brexit would be conducted in a very orderly and calm manner befitting the British sensibility, and maybe after a cuppa or two, we would get moving, in our own time.

The Daily Squib was given exclusive full access to the Vote Leave conference today in London.

“But there is no requirement for that to occur – quite the opposite. Logically, in the days after a Vote to Leave the Prime Minister would discuss the way ahead with the Cabinet and consult Parliament before taking any significant step.

“Preliminary, informal, conversations would take place with the EU to explore how best to proceed.

“It would not be in any nation’s interest artificially to accelerate the process and no responsible government would hit the start button on a two-year legal process without preparing appropriately.

“Nor would it be in anyone’s interest to hurry parliamentary processes.We can set the pace.

“We will repeal the 1972 European Communities Act, which automatically gives EU law legal force. But we can change it on our terms at a time of our choosing. After we establish full legal independence we can then decide which EU-inspired rules and regulations we want to keep, which we want to repeal and which we wish to modify.”

On the subject of the free trade zone, Mr Gove gave a simple yet erudite explanation:

“There is a free trade zone stretching from Iceland to Turkey that all European nations have access to, regardless of whether they are in or out of the euro or EU. After we vote to leave we will stay in this zone. The suggestion that Bosnia, Serbia, Albania and the Ukraine would stay part of this free trade area – and Britain would be on the outside with just Belarus – is as credible as Jean-Claude Juncker joining UKIP.

“Agreeing to maintain this continental free trade zone is the simple course and emphatically in everyone’s interests.”

There is a vast chasm between the positive nature of the Vote Leave campaign and the negative, fearmongering one of the StrongerIn group, who do not address the people with any positivity instead talk down to them. One can immediately feel the affirmative nature of a Brexit as Mr Gove spoke.

On immigration, Mr Gove called upon an Australian points based system of entry into the UK, which is what many have been calling for for years.

“Further, there are five more countries – Albania, Macedonia, Montenegro, Serbia and Turkey – in the queue to join the EU – and the European Commission, as we have just experienced ourselves during the recent negotiation process, regards ‘free movement’ as an inviolable principle of EU membership… And my ambition is not a Utopian ideal – it’s an Australian reality. Instead of a European open-door migration policy we could – if a future Government wanted it – have an Australian points-based migration policy. We could emulate that country’s admirable record of taking in genuine refugees, giving a welcome to hard-working new citizens and building a successful multi-racial society without giving into people-smugglers, illegal migration or subversion of our borders.”

Mr. Gove also touched on a subject that many have ignored so far from both sides of the campaign, and that is a reform of Europe. Britain on a Brexit would thus force the EU to re-think its undemocratic stance to many ongoing issues, and a Vote to Leave would invariably bring about other imprisoned states to break free from the suffocating octopus-like grip of the EU.

“Leaving would also bring another significant – and under-appreciated – benefit. It would lead to the reform of the European Union.

“Manifestly both cannot be true. An EU without the UK cannot simultaneously be a super-charged leviathan bent on revenge and a crumbling Tower of Babel riven by conflict…

“The UK’s success will send a very different message to the EU’s peoples. They will see that a different Europe is possible. It is possible to regain democratic control of your own country and currency, to trade and co-operate with other EU nations without surrendering fundamental sovereignty to a remote and unelected bureaucracy. And, by following that path, your people are richer, your influence for good greater, your future brighter… Our vote to Leave will liberate and strengthen those voices across the EU calling for a different future – those demanding the devolution of powers back from Brussels and desperate for a progressive alternative…

“But for Europe, Britain voting to leave will be the beginning of something potentially even more exciting – the democratic liberation of a whole Continent.

“If we vote to leave we will have – in the words of a former British Prime Minister – saved our country by our exertions and Europe by our example. We will have confirmed that we believe our best days lie ahead, that we believe our children can build a better future, that this country’s instincts and institutions, its people and its principles, are capable not just of making our society freer, fairer and richer but also once more of setting an inspirational example to the world. It is a noble ambition and one I hope this country will unite behind in the weeks to come.”