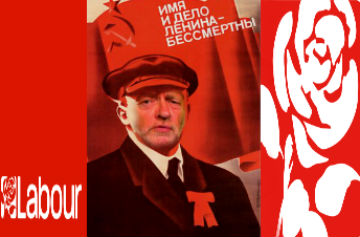 Jeremy Corbyn, the current Labour leader, is therefore siding with Goldman Sachs, and the rest of them, by backing the Remain camp.

“It makes sense why Corbyn would be backing the remain in EU camp, because remaining in the EU will mean the end of the British Royal family, it will also mean complete renunciation of democracy and rule by a solid totalitarian dictatorship. These are tenets that Corbyn believes in, and to use Goldman Sachs for his ends is perfectly permissible.” Robert Pestilence, a Guardian journalist announced on his most recent article.

Socialism works in mysterious ways, however Corbyn is not a fully fledged socialist, watered down with champagne, that he certainly is not. Corbyn is a Marxist, and the EU is a Soviet Marxist construct which he will embrace fully, as will his followers.

One can see Corbyn in a few years, giggling into his grey jumper as the Queen is turfed out of Buckingham palace, and the rest of the Windsors uncermoniously dumped into train wagons sent for processing.

Corbyn is therefore cleverer than he looks.