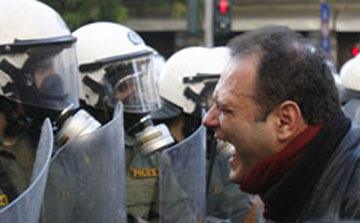 There’s nothing worse for a Greek farmer, who gets massive EU subsidies to plough empty fields, and drives a top of the range Mercedes to be told that he has to now pay tax.

With a country who spent 650 Billion euros in EU loans in less than six years and only having a population of only 11 million people, taxation is never a happy business with the overly emotional Greek populace.

“The EU gave us a 400 Billion bailout last year but we need another one this year too. How am I going to fund my summer houses in Crete and Lake Geneva, and I never paid tax in my life?” a furious beet farmer, Nicos Calaminitos from Keleftekos, a village 45 kms from Athens told Greek radio station, AKS.

Certainly, the mood is strained, the IMF’s Legarde wants assurances first before unloading more billions into the Greek black hole, however how is one to deal with the Greek aversion to paying tax?

Dimitrios Kolokalotiris, a shepherd from Thessaloniki may have the answer: “We get the money, the Germans pay tax for us. This is the only way. Now, excuse me, I have to ride to tend my flock in my Porsche.”