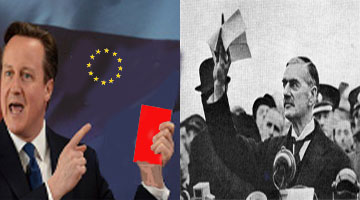 Much like Neville Chamberlain, David Cameron is once again proclaiming victory and peace in our time by agreeing to an ominous red card system which will never address the issues facing Britain or ever be allowed to be exercised by parliament.

“This is a red card which will not solve anything, much like the piece of paper Neville Chamberlain brought back from Hitler’s Germany before all hell broke loose in World War II, Britain, thanks to me is being duped once again. History repeats itself over and over again,” Cameron told no one in particular today.

The shameful cowardice of the current prime minister of Britain is a stain on the sovereignty of this country compounded by an EU delegation intent on thwarting Brexit by any means possible, including bait and switch techniques and outright lies.

“A red card brake system that is being touted by Cameron as a victory is none. What use is a brake when you do not have control of the steering wheel? The red card system can only be used if 28 other EU members okay its use, as well as dozens of committees in parliament and political parties. It is an absolute joke, and should not even be acknowledged as a brake, or return to national sovereignty,” a Euro-sceptic MP said before being silenced.