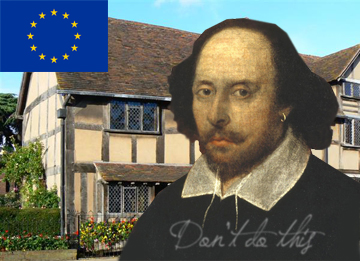 Few historical figures in English history exemplify this country more than Shakespeare and this is why the discovery of this manuscript carries such import.

Professor Richard Charringcross, who headed the research team, discovered the manuscript hidden in a hole positioned directly behind the poet’s privy.

“We believe this is the area where Shakespeare wrote his best stuff. He would come here, sit down and bang, the creative juices would flow as he plopped and strained away the day’s mundane troubles,” professor Charringcross revealed in his new documentary, to be aired on BBC7 in March.

The text of the manuscript reveals a glimpse into Britain’s future, and is a sort of call to arms for the English people to resist the EU Referendum In calls from the “artless spur-galled puttocks” that are so intent on selling off the country to the “mad mustachio purple-hued maltworms” that tout their wares “like one of our French wither’d pears: it looks ill, it eats drily”.

Shakespeare then goes on to describe a person that remarkably sounds like David Cameron, ” I scorn you, scurvy Camo-Maroon. What, you poor, base, rascally, cheating, lack-linen treachurist! Away, you mouldy rogue, away!”

As for Jean Claude Juncker, Shakespeare leaves no doubt about his credentials, “..Junk’er, a most notable coward, an infinite and endless liar, an hourly promise breaker, the owner of no one good quality.”

The full manuscript will be revealed when the documentary airs in March on BBC7.