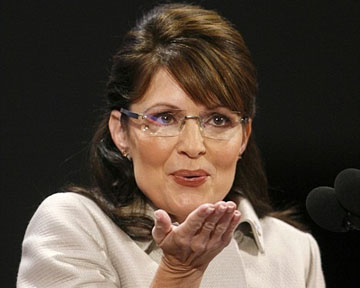 Hillary Clinton has been given a gift on a silver platter — the Sarah Palin endorsement does it every time.

“I did it to that other old fart and I’m gonna do it to this one,” Palin said at the speech in Ames, Iowa on Tuesday.

Donald Trump is currently riding high in the polls and is the favourite candidate to take the Republican seat, but this is what the plan is, and any other Republican candidate would be a loss for the Democrats.

“Trump is the gift that keeps giving. We don’t want a proper Republican candidate so Trump is being moved forwards for a very good reason. Once he’s nominated, that’s when we bring out the real dirt,” a Democrat insider revealed.

Looks like for now, the circus is in town and the unveiling of Sarah Palin, the eternally geographically challenged dipsical lobotomy is pure entertainment.

Sit back, break out the popcorn, the Schlitz, and enjoy the ridiculous show.