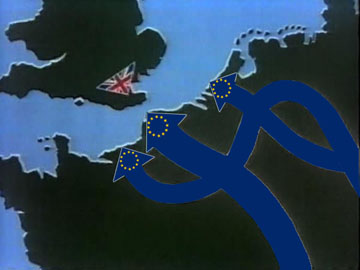 The EU bloc would still be a trading post, Britain and the EU are all members of NATO and protected militarily, and the United States would still have its trusty mother country staunchly standing by its side.

Leaving the EU would only mean the UK is not forced into policies that do not benefit the country, for example, the British Isles are a tiny land mass, it is physically not possible to fit 50 million extra refugees from Islamic countries onto this land without civil war erupting.

Already, native Britons are seeing their essential services budgets cut and reduced, their hospitals overcrowded and their schools completely flooded, this is because money has been diverted to benefits for EU economic migrants and asylum seekers.

Britons are essentially being overtaxed and not seeing any improvement to their lives but to the lives of other people, freeloaders, and what are seen as parasites.

The EU and its diktats get more ridiculous by the week, especially when the overpaid profligate unelected officials who are ordering these new laws into existence enjoy lives of extreme privilege, unlimited expense accounts, diamond encrusted pensions, and luxury foreign travel perks — and you’re paying for it.

If Britain exited the EU, this would be an economic haven away from the corruption, and the country would attract trillions of pounds in investment from disenchanted citizens of the EU. We would have the affluent and educated of Europe coming to the UK to spend their millions, to bring their expertise and to build a haven away from the continent which has been ravaged by poor, ill thought policy, mass migration, and corruption.

Embracing Brexit is therefore akin to embracing life, to not do so is embracing death and slavery.