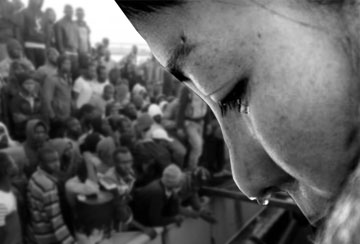 Why does the mainstream media keep quiet? Why is there no reporting on the atrocities committed every day? The reason is that the media is told in no uncertain terms to keep quiet about the violence and rape, and if they do not keep their silence, then they will lose their jobs.

Journalists are not allowed to report on anything that may give a negative viewpoint to the forced immigration, because this is what it is, it is being forced on Europe and the people who have to live in the chaos have no say on the matter. The ones who are enabling and encouraging the migration do not have to live with the migrants as the rest of the population do, therefore they are not affected and do not see, smell, hear what is going on. The policy makers are not raped, turfed out of their homes, or violently assaulted but you are.

And now we come to the ultimate silence, a silence of a young female ‘No Borders’ activist violently gang raped by a pack of Sudanese migrants. Her shouts for help were not heard, as each one of the brutes repeatedly raped her, leaving her violated body in a bloody mess in a migrant camp shower cubicle.

The only national newspaper to report the incident, Corriere Della Serra reports that the woman, around 30 years of age, would have reported the horrific crime were if not for her fellow left-wing activists, who convinced her that if the truth got out it could damage their socialist do-gooder utopian dream of a world without borders. There has been silence from every other news organisation in Europe including Britain.

Colleagues are alleged to have said that reporting the crime would set back their struggle for a borderless world.

The ‘No Borders’ activist had dedicated a month of her life to helping migrants. Her group was stationed between Italy and France in Ponte San Ludovico in Ventimiglia when the atrocity occurred, according to reports from local papers La Stampa and Il Secolo XIX.

On the 3 October, Osman Suliman, 20, a Sudanese asylum seeker who had been in the UK for just five months, appeared in court.

He was charged with the rape of a Nottingham woman on the 26th of September, The Nottingham Post reports.

There will be more horrific rape, violence and terror, culminating in anarchic chaos. Your daughters, your children are not safe, and this is what the controllers want, they want you to feel unsafe, they want you to be raped violently and they will not help you. Your home, your schools, your country, your continent is finished, and to some extent it is your fault because you voted for the socialist Marxists.

Let chaos and anarchy reign, your terror is the fuel that feeds the capstone.