Ylang Ylang was tossing a volleyball into the melee of 70,000 odd beach revellers on this sweltering summers day when she not only lost the ball amongst thousands of exact replicas but she also spotted a fin moving around in the water.

On Wednesday, more than 70,000 locals and visitors encamped on Fujiazhuang bathing beach, this is the highest figure so far this summer on North eastern China’s Dalian seashore.

The management department of Fujiazhuang Bathing Beach has boosted the number of beach life savers to 27,000 so as to prevent any drownings.

However, they did not count on any Great White sharks combing the waters and looking for some human dim sum.

Party officials were thrown for a six when panic suddenly erupted and 50,000 Chinese swimmers in sector G decided to run out of the water whilst screaming in extreme alarm. This resulted in 20,000 sector H sunbathers being inundated by panic as well. 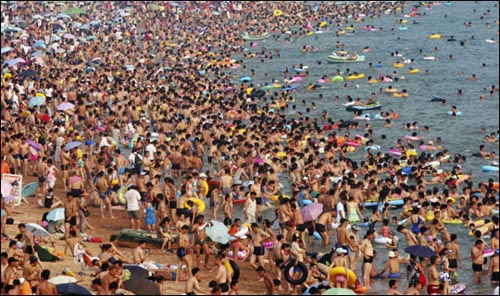 Marine biologist Xau Fan Fung explains his theory: “I believe the shark was attracted by the splashing and noise that 50,000 people make when bathing in the water simultaneously. Also, sharks are attracted by very small amounts of blood or urine in the water, you can imagine what would happen if there are thousands urinating in the sea at the same time.”

There were no casualties from the shark but some 3000 people were trampled under foot from the stampede.

In the mad scramble 145,000 flip flops were left abandoned and 57,600 beach balls and matching beach towels were discarded.

The resultant yellow urine slick from the fearful bathers could be seen by satellite imaging equipment from space.

Scientists estimate the slick will arrive on the shores of the California coast in 3 weeks.