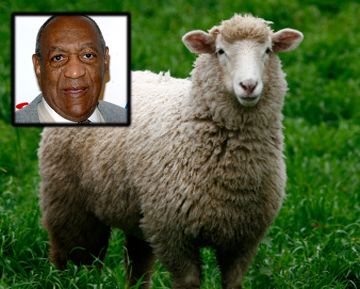 It was late 1976 and Bill Cosby had arrived on a farm visit at the bequest of a friend.

“He came in the morning, and I had my pet sheep Dimples with me. I wanted to show him some farm yard animals as I was great fan of the Cosby Show. Then in the afternoon I was calling for Dimples, couldn’t find her anywhere. Bill came around the corner and said he had just been checking out the bushes. I thought nothing of it,” Elroone Draper, recalled.

After Bill Cosby had made his excuses, he left the farm and this is when things got really weird for Draper.

“I was tending the farm, and still no sight of Dimples. Then I saw something twitching in the bushes, it was Dimples. She looked kinda groggy. I got her up on her feet and saw she couldn’t walk all that good. You know with all this stuff in the news recently I had to say something. I still remember my little ol’ Dimples, how she just wasn’t right after that episode. Years later I showed her a picture of Bill Cosby. Never seen her run away so fast in my life.”