“You just can’t compete with that kind of tennis. ‘She’s’ 6’9, has a huge masculine skeletal bone structure, large muscles, y and x chromosomes, and the biological genetic DNA code of a man. Whacking the ball at over 140 MPH, the women on the receiving end of the serves had no chance. I would safely say, even Serena Williams would have a tough time,” one woman’s coach told reporters after her player was beaten in solid sets.

The transgender tennis player was admitted into the tournament a few days ago and went through the female players like a knife through butter.

Declaring herself to be fully female after having the full transgender treatment, Fifi Leroux, formerly Graham Mansfield, 34, from Queens, New York, towered over her female rivals in the Women’s New York State Tennis Tournament.

“I have just as much right as anyone else to compete in the women’s tournament because I am a woman,” Leroux grunted from the court after beating another female player in straight sets.

Leroux plans to go all the way to Wimbledon, and says she can easily beat any woman on the tennis court.

Lumbering around the court, Leroux wears a skimpy white dress barely covering her vast muscled body, and can hit the ball so hard, at one match the tennis ball lodged itself in a ball boy’s chest, and was needed to be surgically removed, nearly killing him. 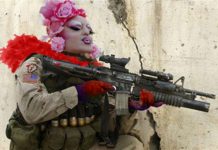