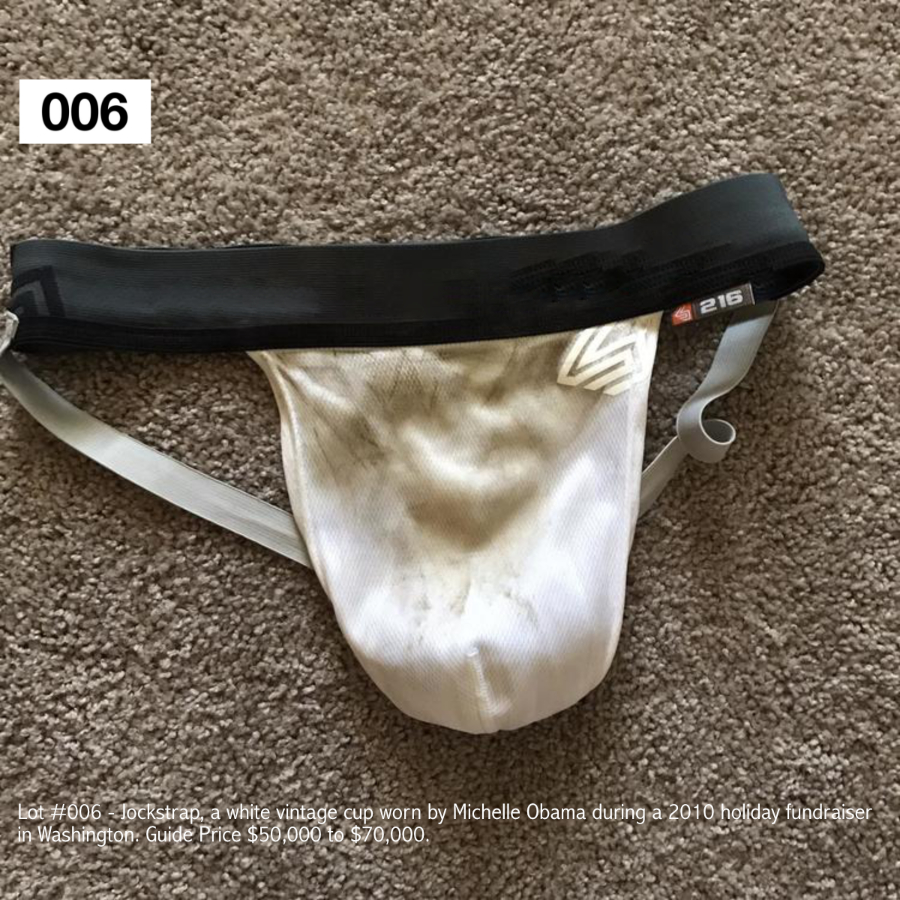 Senior auctioneer, Miles Lundgren, who examined the jockstrap cup previously owned by Michelle Obama revealed why it will fetch a high price at the celebrity auction.

“Look at the size of this cup. It’s fucking huge, ‘scuse my language. You can fit a rolled up full length garden hose into this thing and still have some room. We don’t know what Michael is packing in there, but she’s got something big! It smells bad though, we have to keep it in a sealed box, because it smells like 60-year-old fermented crusty helmet cheese mixed in with stale body odour and a touch of mouldy coconut oil. As a bonus, there are even some pubes left in the cup, so this thing is as authentic as it comes.”

The jockstrap, a white vintage cup worn by Michelle Obama during a 2010 holiday fundraiser in Washington, is expected to fetch $50,000 to $70,000 when it goes up for sale in December at Dupree’s Auctions, the company in Beverly Hills, California, said on Thursday.

It is the first jockstrap worn by Michelle Obama, who became a style icon for all transgenders during her eight years at the White House, ever to come to auction, Dupree’s said.

The items were not put up for sale by the couple but by agents working for the couple.

“The Obamas’ personal items … don’t come up very often,” said Aloysius Klondike, gallery director for Dupree’s Auctions. “But every now and again some things fall through the ass crack.”

Barack Obama’s pink tutu from his days on the Punahou ballet school in Hawaii comes with the 1979 school yearbook, which includes photos of him prancing around pirouetting with gusto.

Obama’s love for ballet continued during his eight years as president, and he converted a tennis court at the White House to a mirrored ballet studio, so he could dance with Michael into the early hours of the mornings.

Klondike said he expected interest to come from “LGBTP activists, gay history collectors and those who want to feel part of the legacy of President Obama.”

The two items will be auctioned from Dec. 12-13. The Obama pieces will go on public exhibition at the Museum of Gay Style Icons in San Francisco, and at Dupree’s in Beverly Hills ahead of the sale.