“It’s like switching off a TV. Once the old people get to a certain age we flick a switch and they turn off. This way we get to keep our immense salaries,” BBC executive, Tim Rice, revealed today.

The new policy will involve fitting old people at a certain age with an off switch, when flicked, the elderlies simply expire.

“Old people in Britain are treated like shit anyway, so they won’t even notice or care when they are switched off. It’s a huge burden on society as well as the BBC. How can we possibly afford to pay people like Gary Linekar £3.6 million pounds per year to talk bollocks in a studio a few hours a week? He has to attend to his golf sessions and luxury holidays in Barbados every few weeks,” Rice added.

Because the BBC is funded by taxpayers, the death switches will be funded by another increase in the TV licence, and will rise every year as BBC salaries rise.

“Not only will they not have to pay a TV licence any more, but the NHS will save billions per year looking after the elderlies. It’s a win win situation for the BBC and the government. We take everything out of these people during their lifetime, then when they’re all used up, simply flick a switch, and they’re gone.”

How Will the BBC ‘Switch Off’ Scheme Work?

All costs to the recipient will be factored in through the TV licence tax. Once a citizen reaches the age of 75, they will be switched off.

The switch will be embedded on the left side of the skull near the ear. The procedure for implantation is very simple, and only takes 5 minutes to install by an approved BBC licence engineer.

Once the switch is flicked, a signal is sent simultaneously to the heart and brain of the elderly person switching all functions off. Once the old person has been switched off, a BBC van takes away the body and a final demand for payment is left in the property. If the elderly has no relatives to pay the final demand notice, bailiffs are sent around immediately to recoup the amount owed for the switch off service.

Naturally all people employed by the BBC and government will be exempt from the ‘switch off’ service, otherwise they would not be able to enjoy their gold-plated pension pots and luxury perks in old age. 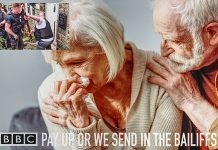