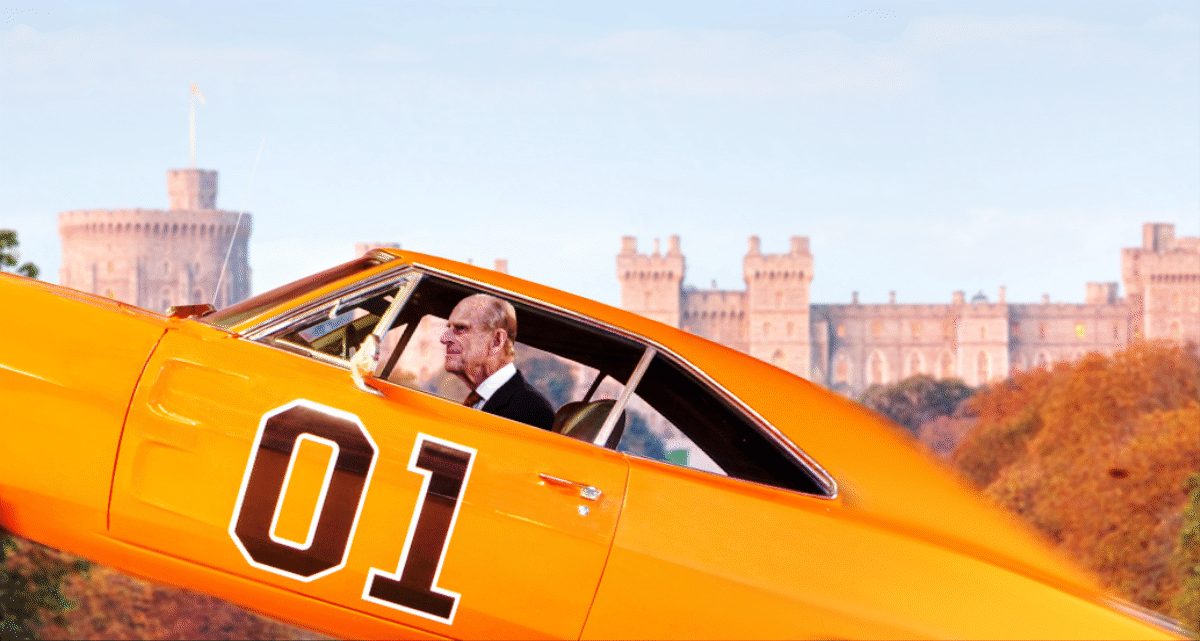 The Duke of Edinburgh, 97, going on 19, last night auditioned for the latest instalment of Hollywood film series, The Dukes of Hazzard Visit Windsor County.

Driving his Land Rover Dodge Charger through the winding narrow streets of Windsor, the Duke expertly flipped the vehicle three times in the air, somersaulted across a duck pond, then landed on a bus stop before crashing through a chicken shed and coming to a full stop smiling like a cat that just slurped a bucket full of cream.

The Duke is one of the best drivers in the country having been trained by SAS instructors, and is an expert in counter ops driving skills.

“I’ve seen him go into an ambush laughing, expertly spin the vehicle around barely touching the kerb at speed, then ramming the terrorists whilst simultaneously firing a Heckler & Koch through the windscreen,” the Duke’s protection officer revealed.

The Hollywood production team were thoroughly impressed by the Duke’s motoring skills, and want to hire him as Bo and Luke’s long lost uncle sixteen times removed, Eddie Duke.

Director Brad Mullin, was positive that the Duke of Edinburgh was right for the job.

“When he saw the actress playing Daisy, we saw this wild glint in his eye, because at the time she had just bent over to pick up her hairbrush. He whistled at her and shouted ‘Ere darling, watch what I can do!” and vroom his car work was goddamn amazing. I knew he was the man for the role right away.”

The new Dukes of Hazzard film will be set in the backstreets of Slough and Windsor. Bo and Luke plus the rest of the team receive a letter of distress from their long lost uncle Duke Edinburgh. They fly across the Atlantic and have the General Lee shipped over to help him out of his troubles. Boss Hogg, Rosco and Enos will also have prominent roles.

The film will be released in 2020 Warner Bros announced.