They’re both mad as hatters and like nothing better than to mumble, but is that where the similarity ends?

Observers of Colonel Gaddafi have been astounded at the stunning similarities to Brummie rock star Ozzy Osbourne.

“I couldn’t believe my eyes when I saw Gaddafi up on the wall gesturing at some fake supporters in Green Square last week. I mean it could have been an Ozzy concert. I was half expecting the chords of Mr Crowley to start chiming in,” Melody Maker journalist, Schiet Bagg, reported in his weekly column. 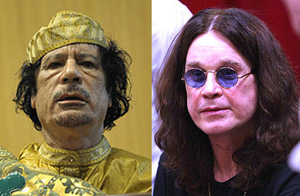 Ozzy’s family and old friends from Birmingham say they remember a Libyan carpet salesman calling on the Osbournes about nine months before a child was born in 1942, who was then given up for adoption. Of course these are just rumours, but you never know.

Speaking from Los Angeles, Sharon Osbourne was eager to begin talks with the colonel: “We’ll have to do a few preliminary tests on him first. Like I’ll put a live bat in the room and see if the colonel manages to rip its head off with his dentures. I’m getting Ozzy to fly out to Tripoli next week, you never know, Gaddafi might also give us a few of his billions.”