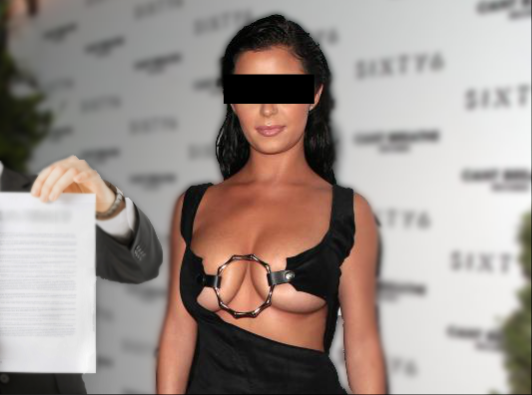 As she posed on the front steps of the Sixty Beverly Hills Hotel, Coco’s bold fashion statement saw her almost completely expose herself to the cameras.

The only catch — if you are male and look at her, you are immediately handed a signed form from a lawyer waiting around the corner suing you for looking at her body.

“I can dress like this but it does not mean a man can look at me. I am wearing a dress with a strategically placed metal ring gripping the two sides of my dress together across my massive heaving bust to make sure they are barely kept under wraps. That does not mean that you have the right as a male to look at what I am flouting. It is my feminist right to wear what I want, but it is not your right as a male to be attracted to me or my body.”

Coco’s lawyer had a busy time throughout the night as any male caught even glancing towards her was handed the form suing them for sexism and something that is called ‘eye-ball rape’, a new statute created in the California courts, where women are given rights way above any men.

One guilty man who was sued was close to tears as he said that he looked at her bust momentarily because there was pretty much nowhere else to look at.

“Her lawyer handed me the form saying that I will be sued for over $500,000 for the crime of looking at her bust. I have been arraigned to appear at LA County court next week. I can’t afford that kind of money, and I’ll have to sell everything. I’m finished!”

Arriving at the event and fluttering huge eyelashes, Coco provocatively partied with a host of other celebrities including Gina Tootitts, Marianna Trench and Lois Poussie.

Coco Mondreal has never been one to miss out on an opportunity to show off her incredible figure and will stand to make over $8.6 million by suing all the men who dared to look at her during the evening.