“What can we say, Paris thought she was into that other religion last week but she gets bored all too easily. Besides, the praying five times a day thing with fasting was really getting on her tits. She likes to dress in fetish gear daily as well, and underneath her Burqa it was getting way too stinky,” Mr Brinkham revealed.

What was tipped as a major turning point in Islamic Western relations has now turned into a farce of epic proportions with even President Obama getting involved.

“I keep getting Middle Eastern leaders phoning me on the hotline praising Paris Hilton for her conversion to Islam. I then try to explain to them who Paris Hilton is, but they don’t get it,” a frustrated Barack Obama relayed through his press office.

The former glamour model and ex-heiress, who has slept with a reputed 12,000 people so far, seems to be finally reaching enlightenment and celebrated her spiritual journey yesterday by splashing out on a pair of $8,000 shoes.

She met former felon, Bodhidharma Mahatma Ibn Himar during the same retail therapy session at the famous Rodeo Drive shopping area in Beverly Hills and was convinced to join his Buddhist sect.

“I think this time this is the right religion for her. Although I have to say she has been through about 23 religions and cults this year alone,” her sister, Nicky Hilton told TMZ.

Paris’ latest boyfriend, Brad Mullet, opined: “Paris tried Islam for a week. Now she’s being mentored by a Buddhist monk and I guess two weeks from now she might try something else.” 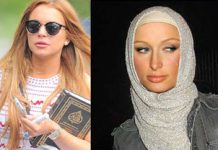 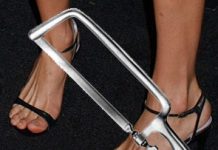